Home VideosBe Glad You Are a Yankee Fan 11-1 Garnets Beat Huskies in Extras, 1-0

Sean Thompson pitched eight innings with an injured leg to beat the Huskies.

The bullets are the kind fireballing pitchers launch from the mound. Bruno’s team saw plenty of them last week when they lost 2-1 in 11 innings to undefeated R.C. Ketcham at the Walt Disney World baseball complex. The loss to the Class AA squad spoiled a strong effort by Garnets’ junior starting pitcher Declan Lavelle, who gave up just two hits over 7+ innings.

The team bounced back from that first loss of the season to clobber John Jay-Cross River 24 hours later by a score of 10-1. Junior Sean Thompson hurled a nine-strikeout six-hitter while driving in a couple of runs for the Garnets.

Then they flew back to Rye to host 8-2 Hendrick Hudson High. Lavelle was breezing, up 4-1 in the top of the 7th with 12 strikeouts to his credit, when an infield hit and a pop fly single to left preceded a rare mistake pitch: a ball left up in the zone that was hammered all the way to the left-field fence for a two-RBI double. Living dangerously, indeed. Lavelle issued an intentional walk for a force at any base, a strategy that he rendered unnecessary by striking out the final batter of the game for the win that gave Rye its 10th victory.

It was a case of out-of-the-frying-pan two days later when the Harrison Huskies came to Disbrow. Their starter Vinny Corso more than matched Thompson by striking out 10 while yielding only two hits. Thompson’s effort, though, was made more remarkable by the fact that he’d injured his leg in the Hen Hud game 48 hours earlier. He topped off his one-legged, extra-inning effort by setting down the Huskies 1-2-3 in the top of the eighth. 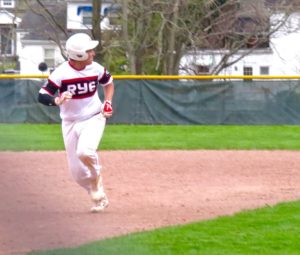 Co-captain Alex Noga comes around to score the game’s only run.

Then senior co-captain Alex Noga drew a crucial base on balls in the home half. Sophomore Aidan Sullivan laid down a perfect bunt to sacrifice Noga into scoring position. And score he did when Lavelle’s sharply-hit smash was misplayed by the Harrison defense.

Winning pitcher Thompson modestly played down his injury, one that kept him from taking any at-bats, after the game. “I was just focused on getting the win for the team.”

The Garnets had little time to savor the victory, taking on Blind Brook Saturday morning, April 27, at 11 a.m. Then they travel to Byram Hills Wednesday, May 1 and Lakeland High May 2.

Bruce and Margie Warwick to be honored at Under the Stars

Panthers Power Their Way Up the State Rankings