Home NewsBusiness & Orgs By Georgio, They’ve Got It

By Georgio, They’ve Got It

By Georgio, They’ve Got It

In the world of developing young real estate brokers, after just three years, Chelsea Georgio has already made a name for herself and is a top broker at Houlihan Lawrence. Her tag line is “leading the way for the next generation.” She is also an integral part of the marketing side at Georgio Home, a high-end design/build firm owned by her father, Robert Georgio.

“Clients reach out to us to put the whole custom process together, from conception to design to permit,” says Robert. “We often find them the property.”

A big advantage their firm has over other local developers, Robert believes, is their street-level showroom in downtown Rye and an upstairs office with a giant worktable — “big enough for us to eat an Italian family dinner at — where our whole team meets.”

Three other things distinguish Georgio Homes: “Our construction is Uber–level; we work with a variety of architects and are therefore not pigeon-holed; and we build for the client, never for resale.” 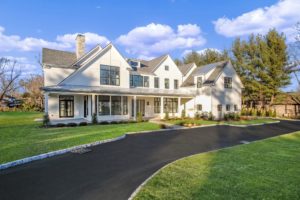 Modern and farmhouse mix well in this Georgio home in the Sterling Ridge neighborhood of Harrison.

Modern in feeling, they get very excited when a client asks them to give a Tudor home a total makeover. Last summer, they created a resort backyard for a client who wanted something non-suburban. One of Robert’s favorite projects was closing off an indoor pool and transforming the space into a towering library/family room. “I kept the Grecian pilasters.”

Construction and design are in the family’s blood. While Robert went off to college to study medicine, he became a shoe designer. Twenty-five years ago, while still in the fashion business he started building houses.

Chelsea is not only a born salesperson but a young woman with a keen eye. During construction, she will turn to the team and the client and say: “This would work best as a two-story addition”, or “It would really make sense to make this a walkout basement.”

And if a client has money enough and space, the Georgios are advocates of two powder rooms, not one, on the ground floor. Imagine the possibilities from there.

The Road to Best and Highest Offer

Be an Angel and Run

Thrift Shop: Repurpose with a Purpose