Midsummer, for many, is synonymous with the Annual County Swim Meet, where the competition sparkles year after year. At the 94th “Counties”, Lake Isle, a perennial contender, won the overall competition, but Rye Golf Club brought home the gold in Diving, took third place in the Girls Relays, and fourth place out of 32 teams overall. Shenorock Shore Club placed second in Diving.

This was Laverty’s eighth and last time competing in the diving event, as she will age out before next summer. But the rising Rye High School senior will captain the school team. Laverty said, “While it’s sad to end my summer diving career, but I’ve had a lot of fun with this sport and I’m excited to see where it takes me next!” 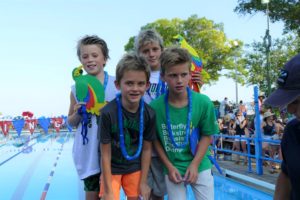 As if the excitement of the competition itself wasn’t enough, on the third day of Counties, the skies erupted a few minutes before warm-ups. All the swimmers, staff, and volunteers had to evacuate the pool area forcing Day 3 to be held the same day as Day 4.

Crossing The Sound For Cause

Garnets Soccer Too Much For Mamaroneck

Things Are Heating up for Rye Town Park...

Town on the Run

Try to Remember the Kind of December…