Members of the Rye Neck High School Mock Trial team, who are vying for the Westchester County championship title, won the preliminary round of the competition against Solomon Schechter School of Westchester, held at the County Courthouse in White Plains on February 28.

The team has been diligently examining the case of <Harley Davison v. Gotham City Department of Housing Preservation and Development> and preparing to act as attorneys and witnesses and present their case in a courtroom setting. The case centers on Harley Davison, who is fighting for legal custody of an apartment that he claims to live in with his aunt before her unfortunate passing. After the aunt’s death, he filed for succession rights, but was denied by the Department of Housing. He is appealing the decision on the grounds that the investigation was arbitrary and capricious and that he did in fact meet the guidelines for succession. 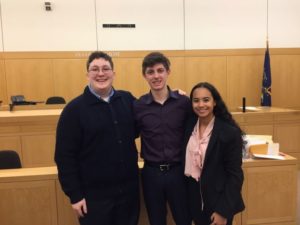 In the first round, juniors Nathan Lesser, Lucas Pasquina, and Juliana Silva served as attorneys for the plaintiff, and junior Tiana Colon and sophomores Josh Rubin and Gabe Miller were convincing witnesses.

Mock Trial team coach and Social Studies teacher Marcella Scalise said her students are well prepared and more than ready for their next opponent, Blind Brook High School, whom they will meet March 7 at the County Courthouse.

Athlete Of The Month

A Perspective on Test Scores and Learning: A...

Students Charting Their Own Paths in Science

Hot Off the Presses