Rye High capped a day of clinics and play at all age levels Saturday, January 5th? to defeat the visiting Harrison Huskies, 53-43. The win not only got the new year off to a good start against their rivals, it kept the Michael Ice Trophy in the Garnets? showcase for another year.

Michael Ice, Jr. played varsity basketball for Rye a dozen years ago. He died in a tragic accident a few years later. His teammates helped create a scholarship to be given every spring to the graduating basketball player who may not be the team?s most valuable player, but who best embodies Michael?s qualities of hard work and selflessness. Last year?s winner, Will Tepedino, currently is a freshman at Villanova. He joined Michael Ice, Sr. on the court at halftime to receive applause. 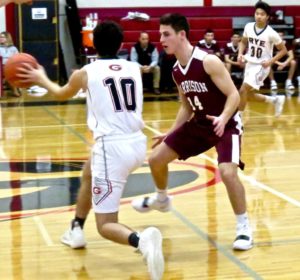 Harrison has partnered with the Garnets for a day of basketball clinics for pre-teens and an alumni game before the varsities take the floor. But the spirit of collegiality didn?t last long after the opening tip-off, as Rye jumped out to a 12-4 lead.

Both teams start athletes who also play football. The difference is, Harrison?s starters played more like linebackers, trying to bull their way into the lane, while Rye?s group of defensive backs used their ball-hawking ability and foot speed to stymie the Huskies? offense, trap and steal the ball, and finish their fast breaks at the other end of the floor. 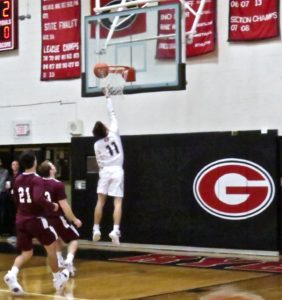 Junior Matt Tepedino, one those football DBs with the quick hands and quicker feet, was the early hero, scoring nine in the opening stanza.

Harrison made it competitive in the second quarter, outscoring Rye 10-9 on the strength of a couple of three-pointers by Alex Siapanides. Still, that only gave the visitors 14 points heading into the locker room, thanks to Rye?s constantly swarming defenses, whether zone, man-to-man or a three-quarters press. 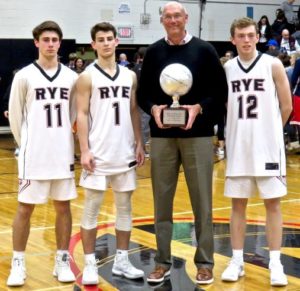 Harrison gave it the old high school try coming out of the break, drawing fouls and going to the line. But they only converted 3 of 9 from the stripe, and fell farther behind, 34-19, after three periods of play.

Rye Head Coach John Aguilar had been going to his bench liberally throughout the game. When the score reached 48-27, he sent his underclassmen in to finish the job. Play became disjointed, with lots of fouls and lots of missed free throws. The Garnets canned 6 of 14 in the final quarter, while Harrison did marginally better, making 4 of 7. It wasn?t nearly enough, and the game ended with a double-digit win for the home side.

Quinn Kelly and Matt Tepedino would end up with 12 apiece, while Siapanides and Mike Cooper?who scored all his points in the fourth period?shared top honors with nine each.

Afterward, Coach Agular was asked about leaving his youngsters in during the last, frantic minutes of play. ?I have faith in them,? he said. ?Still, if we lose, we lose.?

They didn?t lose. The victory makes up for a tough one-point loss to Pelham 24 hours earlier, 66-65, and returns to the winning ways from before Christmas when the locals defeated Hen Hud 73-48 and then Spring Valley 96-81, with Kelly scoring a career high 38 and Tepedino 21

The Consequences of Deferring Maintenance of the Boat...