Declan Lavelle, with football, leads Rye onto the field.

Rye High kicked off its football season at 7 p.m. Friday night against the Eastchester Eagles under the lights at Nugent Stadium. By 7:30, the Garnets had fumbled the ball, had it intercepted, and given up two long bombs, one for a touchdown. The only thing that went right up to then was the pre-game coin toss by Greta Kennedy-Lee, whose late uncle Ricky quarterbacked the Garnets 40 years ago. The coin came up heads after Eastchester’s captain called tails. 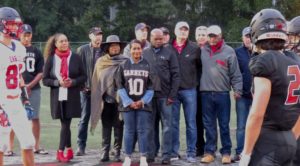 The contest started to turn around four minutes into the second quarter when senior Hayden Reno blocked a punt deep in Eastchester territory. Declan Lavelle would rumble in for the touchdown from three yards out. But a missed point-after kept the visitors on top, 7-6.

Eastchester would go three-and-out on their next series and speedy Matt Tepedino returned the punt to midfield. Three plays later, Lavelle hit senior Quinn Kelly with a 27-yard scoring toss. He went back to Kelly for the two-point conversion that atoned for the missed PAT. With six minutes to go in the half, heavily favored Rye was finally up, 14-7.

When Eastchester chose not to punt on fourth-and-one from its own 38, Rye’s defense rose up and stopped QB Angelo Speradino at the line of scrimmage. Then, on third down from the Eagles’ 25, Lavelle again found Kelly free in the end zone. Freddie Clark’s kick made it 21-7 with three minutes to go. 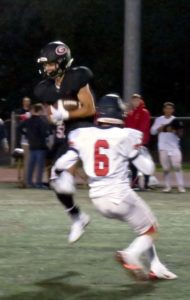 Eastchester had put real pressure on Lavelle and the O Line early on, but lost two of their best defenders to injury before the halftime whistle sounded. Two-way players Paul Torre and John Albertelli both were helped off the field, Torre with a possible ACL tear.

The second half saw the Garnets increase their advantage. Cousin Brendan Lavelle opened the third quarter with 5-yard scoring run. After a safety made it 30-7, sophomore Caden Whaling put the game out of reach with a nifty 19-yard run off right tackle.

Eastchester’s Christian D’Agostino gave a little life to the visitors when he romped for the game’s longest run, scoring from 60 yards out. Declan’s younger brother Liam, though, scored on an eight-yard run late in the game. Then, backup quarterback Jack Griffiths  hit CJ Nemsick with a 2-point conversion pass.

The Garnets travel to play Clarkstown North at 7 p.m. on Friday the 13th. An omen?

Panthers Play To A Draw

A Billion Oysters To Save The Sound

Turning Over a New Leaf in Composting

Victory at the Cellular Level

Holy Child Soccer: Gryphons Leave it All on...