Shorty before the wrestling match between Rye High and Peekskill on the first Thursday of the New Year, I asked Head Coach Joel Jenson if he might have time afterwards for a quick interview.

He told me the interview might go longer than the match. ?Peekskill only has six wrestlers.? 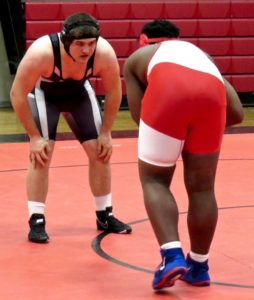 Junior Peter Patouhas (facing camera) will go on to pin Peekskill?s Kendall Cousins at the 4:41 mark.

Dylan?s older brother Tyler, a senior co-captain, had to earn his eighth victory against just one defeat. He pinned Rashaun Williams at 220 lbs. after just a minute of their bout. In the other pairings, ninth grader Caleb Wexler scored a 9-3 decision over Eduardo Ramirez at 145; junior co-captain Joseph Sciulli, weighing in at 160, won on a major decision, 17-3; classmate Grant Howard pinned Jordan Alvarez with 25 seconds to go in their second period; and yet another junior, Peter Pahouhas, put away his freshman opponent, Kendall Cousins, with a third-period fall. A second bout was held at 195 lbs. between two grapplers named Carlos. Rye?s Rodriguez pinned Peekskill?s Lopez just as the buzzer ending the first period was set to sound. 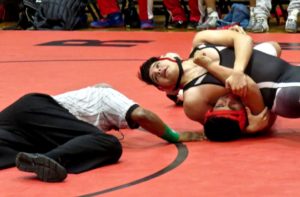 Senior Carlos Rodriguez, wrestling at 195, will pin another Carlos, last name Lopez, in the next two seconds.

Through it all, Rye Head Coach Joel Jensen talked his charges through their moves. ?Get his head down?move your feet?back away?now use your hips? rang out around the gym, because Jensen?s voice has more decibels to it than most P.A. systems can manage.

In the recent past, Rye has been the team that has to forfeit a lot of matchups. Not this year. 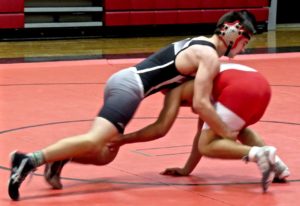 ?We finally have some depth,? the coach said. ?For all the time I?ve been here, we?ve lost to Rye Country Day because we didn?t have enough kids. We beat them this year 42-21 right before Christmas. They have a strong program with some tough kids, so it was a nice present to get.?

Tonya Wants You To Skate: It Must Be The Weekend

Wildcats’ Glass Is Either Half Empty or Half...

Not With a Bang, But a Whimper

Athlete in the News: Tara Berger