Senior Sam Poole (22) broke up plays at one end and started them at the other.

On paper it was a tossup. After steamrolling Byram Hills in the Sectional finals by 8-2 two weeks ago, the Rye Garnets tore through Section 2’s lacrosse champions from LaSalle Academy 14-5 in the Regional semis, and put an even bigger licking on Red Hook in the finals, 18-3, when they played at Schuylerville High School June 1.

Meanwhile, the Suffolk County champs from Shoreham-Wading River whitewashed Babylon High by 14-0 and defeated Half Hollow Hills 18-6 before prevailing over the Nassau champs from Cold Spring Harbor 13-12. If you’re counting, that means Rye scored 40 goals in their three games leading up to what was billed as the Downstate Finals at Adelphi University in Garden City June 5. The Wildcats scored even more often on their march to Adelphi.

On last trivia item: the two schools had a common opponent, John Jay-Cross River. The Garnets lost to them 8-6 and Shoreham was defeated by the same two-goal margin, 9-7. So, all indications were for a see-saw game between two battle-tested teams. 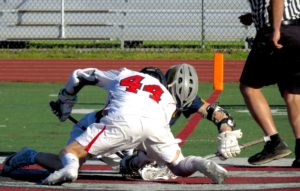 In the end, it wasn’t all that close. The Wildcats outscored the Garnets in all four periods, salting away an 8-4 game at the end of three with a five-goal flurry before the final buzzer. So, it’s Shoreham who’ll go on to face Jamesville-DeWitt in the State Championship game this Saturday.

“In the end, we gave it everything we had against a better team.” That’s Head Coach Steve Lennon talking. “It was a learning experience for a lot of the kids in the early part of the season. We lost games by a goal or two that we’d probably win if we played those teams again.”

All season long, the Garnets have ridden a sterling defense coupled with a youthful attack. Very youthful. One of the team’s main scoring weapons is a ninth-grade midfielder, Caden Whaling, as is a stellar defenseman, Aidan Cunningham. So is the faceoff specialist, Johnny Hartzell. The story against the Long Islanders, though, was freshman Owen Kovacs, who scored four goals on the afternoon. It just wasn’t enough.

The coach said, “Today, our youngsters were up against excellent lacrosse players who are three years older. And stronger. A couple of times Johnny won the clamp at the X, only to have their middies pick up the loose ball.”

“I’m looking forward to it,” their coach said.

Why I’m Voting “YES” for the Capital Bond...

Athlete in the News: Tara Berger

All Those Life Lessons on One Small School...

The Gorillas in the Room — Facing Up...

Caring for the Lives of Others in Rye