Home VideosBe Glad You Are a Yankee Fan Garnets Roll Over Pelham into Class C Finals, 16-3

Netminder Emmet Carroll makes one of his 13 saves

Almost precisely a year ago, Rye High’s lacrosse team was upset in the Class C championship game in overtime, 9-8. Pelham, the other team on the field at Lakeland High that day, overcame a three-goal deficit with 2:25 to play to force OT. Then big George Dunhill scored to shock the Garnets and end the scholastic careers of the Chabot brothers, high scorer Billy and peerless FOGO man Peter.

It’s 2019, and George, Billy, and Peter all play their lacrosse in college. Once again, Rye was the favorite Tuesday as the teams met in the semifinals at Feeley Stadium. The defending champs came in boasting the best face-off man in the Section, Dane Crowley, who’s won 80% of his draws this season. His opposite number, ninth-grader Johnny Hartzell, is no slouch, controlling six out of every 10 face-offs for the Garnets. So, one pre-game question was: would Hartzell hold off Crowley at the X? Another was, would Rye’s defense do to the visitors what they’ve being doing all season—keeping the ball out of goalie Emmet Carroll’s net?

The answers are: yes and yes. Hartzell took eight out of his 17 duels with Crowley, with one win leading directly to a goal. And, even though Pelham threw 25 shots at Carroll, he only let in three  while making 13 stops. The rest were hurried and wild, thanks to Head Coach Steve Lennon’s veteran group of defenders.

The big story, though, was the home side’s rejuvenated attack. Look up “rejuvenate” in the dictionary, and you’ll find it says “to make young.” Like, ninth-grade young. Not only was Hartzell nearly even-steven on the day with Crowley, but classmate Caden Whaling was scoring four times at the other end. The Garnets came into the season expecting junior attackman Tommy DeCaro to carry the scoring load, which he has (three goals vs. Pelham). But Whaling is a pleasant surprise. 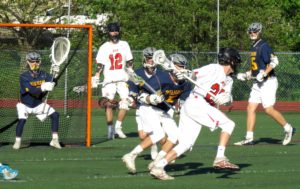 “I’m getting more confident in my moves,” he said after the game. “It helps to play with the other guys a whole season.”

So, with the grudge match behind them and the champs dethroned, the Garnets advance to the finals Friday afternoon at Lakeland, where they’ll face second-seed Byram Hills, a team they defeated 8-3 on May 9.

Many Reasons to Vote “Yes” on June 11

Rye Health & Fitness Makes it to the Big Ten

Wildcats on a Tear

Garnets Dominate Huskies On The Pitch

Garnets Walk Off, Literally, in Playoff Win Over...