Planting Hope: From Acorn to Oak

World-renowned entomologist Doug Tallamy is famously quoted as saying “Let it be an oak!” when it comes to planting trees in the northeastern United States. Tallamy’s field research has shown that oak trees support the greatest number and diversity of native birds and insects of all the tree species he’s studied. Furthermore, landscaping with long-living trees such as oaks helps combat the effects of climate change.

Rye resident and tree enthusiast Judi Linton took this advice to heart this past fall. The Lintons are the guardians of an enormous Northern red oak that sits at the very end of their driveway. The tree, which they inherited when they moved into their house, is estimated to be over a century old and reaches close to one hundred feet into the air. According to a local tree service company, there is only one other historical oak of similar size and age in Rye — on the grounds of the Jay Estate.

Standing dwarfed at the base of its enormous trunk, the Linton’s majestic tree more closely resembles a giant redwood than a red oak. One can get easily lost in thought imagining what events and history the tree has born witness to. The previous homeowner’s daughter dubbed it the “broccoli tree” due to its likeness to an oversized piece of broccoli sprouting up from the ground. Growing up, the Linton children’s swing set stood under its generous canopy and they developed a keen affection for it.

After growing increasingly concerned about climate change and learning about the One Trillion Tree Initiative – a global campaign aimed at combating anthropogenic CO2 emissions that was announced at the 2020 World Economic Forum in Davos – Linton started thinking about ways to encourage and contribute to tree plantings in Rye. Around the same time, her children gave her husband a “Seeds for Life” acorn which quickly sprouted into a seedling after being planted in a pot. 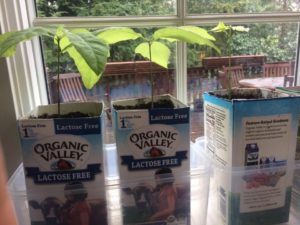 Sparked by an idea, Linton began collecting the cornucopia of acorns that her red oak produces each fall. She had read that trees grown from local seeds tend to be hardier. After selecting only viable, green acorns and researching the best way to preserve the acorns through the winter, Linton placed them in sand to prevent moisture and stored them inside her refrigerator to slow germination. At the end of the project she had over 600 acorns hibernating inside!

In late winter, the Rye Sustainability Committee, of which Linton is a member, launched the “Planting Hope: From Acorn to Oak” initiative with the goal of encouraging residents to plant and nurture the red oak acorns in order to harness the benefits of the mature trees in improving air quality, lessening noise pollution, mitigating flooding, and absorbing CO2 and other toxins.

Committee members pitched in to provide empty half-gallon milk cartons in which to plant the acorns and put together an instructional video on how to test an acorn for viability and correctly plant it.

Fun facts about the tree species were highlighted, including that red oaks can drink up to 300 gallons of water a day (great for flood-prone areas); grow more than two feet in a year; and live between 200-500 years!

The original plan was to partner with local nursery schools in order to get the acorns distributed to interested families. However, the coronavirus outbreak and subsequent school closures sidelined this approach. So, in late March, bins of acorns, containers, soil, and instructions were made available for pickup at the Knapp House on a first-come basis. Residents were asked to wear gloves when taking a maximum of two acorns and supplies.

Scores of acorns were collected by Rye families and are busy being nurtured into baby trees. Linton developed what she calls a “maternal bond” with the acorns and seedlings – which are the progeny of her own tree and months of cultivation. She sincerely hopes that the efforts of participating residents will result in many more glorious red oaks like the one in her backyard thriving and purifying the air throughout our fair city.

They Were Country When Country Wasn’t Cool

The Grass Is Not Greener

Inspiration During The Pandemic

A Man with a Fertile Imagination and Love...