Home Sports He Shoots, He Scores for Frontline Workers

Rye High School senior Rafael Velasquez was one of many basketball players who had their season abruptly end due to the Covid-19 pandemic. It was an especially unsettling reality knowing that his team was on their way to the New York State Regional Finals, having just won the Section 1 Class A Championship.

The starting point guard for the Garnets was a key piece in their stellar season and was a vocal leader who brought the team together. Rye finished the year with a 20-4 overall record and, most importantly, earned the coveted Gold Ball Trophy in their last game of the season.

The last several weeks have been difficult for student/athletes like Rafael, starting with the transition from a typical school schedule to remote learning and the absence of organized sports. Students are granted more free time and less structure, although much of that time is spent at home doing schoolwork. With little to do otherwise owing to the restrictions on activities, they must find ways to fill the gap.

The lack of activity motivated Rafael to come up with a way to teach aspiring young athletes about the game he loves and support health care workers on the front line, as well. 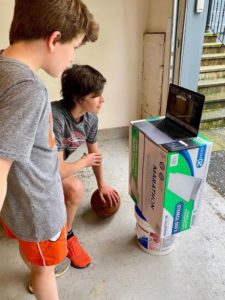 Luca and Colton Strazzini studying Physics (of Dribbling) in their garage.

Having previously assisted Head Coach John Aguilar at his off-season clinics, the Garnet playmaker was confident he could help young players raise their game.

In mid-April, Rafael launched “Handles from Home”, Zoom sessions for grades 3 through 8. The four, one-hour sessions focused on dribbling drills and ball-handling skills and cost $40, with all the proceeds going directly to coronavirus relief funds.

“The clinics have been going really well,” Rafael reported. “We have over 30 kids and more are coming in every day.” In fact, the virtual clinics were so popular that he added four more and extended them into May.

For Rafael Velasquez, “It’s been rewarding working with the kids and teaching them new things that I’ve developed in my game and, of course, supporting the frontline workers who need it most during these times.”