I’ve often wondered what differentiates a hike from a walk. Elevation?

A marked trail? “Go take a hike” has quite a different ring from “take a walk.” GET LOST, BUD versus COOL DOWN, PAL. I’ve got a trail for you on which you can do either, or both. It’s a no-brainer adventure allowing you to blaze your own path or follow one while taking in incredibly unique landmarks: a boardwalk over a swamp, a sentinel tree, an Appalachian Trail (AT) shelter, a mountaintop view, a crumbling psychiatric hospital, and some awesome BBQ.

The trailhead is just north of Pawling on Route 22, about an hour and a world away from Rye, at the Metro-North train stop aptly named “Appalachian Trail”. How cool is that?! You can take the Harlem Line from Grand Central Station straight to the AT. Genius. If driving, park in one of the two lots near Native Landscapes and Garden Center (991 Route 22 in Pawling), where you can pop in to grab a map of what you’ll hike.

The Walk begins by crossing the train tracks at the AT platform into another world. It’s well prepped for hikers so don’t worry. You immediately climb aboard a wide 1,600-foot-long boardwalk, which zigzags across The Great Swamp, New York’s third largest freshwater wetlands. There are Adirondack chairs and benches along the way if you want to bask in the sun like a turtle on a log. The boardwalk was built and is well maintained by volunteers. It’s as if you’re in a zoo experiencing a very realistic exhibit on wetlands habitat.

The Walk then ramps up a bit with a mild climb through a forested hillside, popping through a gap in an old stone wall (cue the bagpipes) into open meadow (cue “The Sound of Music”), then down again to the Dover Oak. It’s the largest oak on the AT and largest white oak in New York at 300 years old, 22 feet around, and 114 feet tall. Hug it and move along.

Now begins The Hike part of your adventure: up West Mountain about 700 vertical feet on a switchback trail, over brooks and through fern forests. The Telephone Pioneers Shelter is about halfway up (a short trail to it shoots off to the left) and is a great place to take a break beside a babbling brook and check out how Through Walkers live. Not to be confused with White Walkers, Through Walkers are the people doing the whole trail from Maine to Georgia or vice versa. Be sure to take note of the trail signs and what they mean. Everything looks different on the way down. 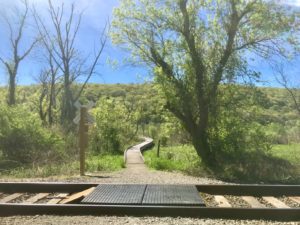 Back on the main trail in the same direction (south), you’ll see a side trail in about a half-hour to the right leading to Cat Rocks, a panoramic east-facing viewpoint from an open rock outcrop. Below you can see everything you just accomplished. From here you can continue on to do a loop around Nuclear Lake for a 14.4-mile round trip or retrace your steps for a round trip of 6½ miles. As always, the return trip is much quicker than the trip out.

For a fascinating sideshow, drive to the next train stop north, Harlem Valley/Wingdale. It looks like the opening scene to a horror flick: lone traveler exits at train’s last stop at a decrepit abandoned hospital. Originally built as a prison, the former Harlem Valley Psychiatric Center was in operation from 1924 to 1994. In the 1930s, the facility accepted the use of a new insulin shock therapy for schizophrenia and other compulsive disorders. In 1941, it began practicing the newly created electro-shock therapy. In the late 1940s, it was the preeminent institution for frontal lobotomy in the state. But enough of the mental. The physical plant encompassed 80 buildings scattered over 900 acres and housed 5,000 patients and 5,000 employees at its peak for a nice one-on-one ratio. It had its own golf course, bowling alley, baseball field, bakery, and a dairy farm that supplied its ice cream parlor. Sounds like a fine place to lose a mind.

The hospital sat empty for 20 years, slowly deteriorating into a creepy film set, until a Korean pastor named David Jang moved his Olivet University in. He is linked to Reverend Sun Myung Moon, cult leader and founder of the Unification Church, thus the madness seems to continue. When my children were little, I used to drive through the campus to scare the heck out of them. That was in the late 1990s and is no longer permissible, alas.

And now for your penultimate stop and reward for choosing the road less traveled: Big W’s Roadside BBQ on Route 22 in Wingdale on the way home. Take it on the road and impress your family over dinner by regaling them with tales of your adventure

Lettin’ Loose At The Jay

The Circle of a Fan’s Life