Curry taking a break with two members of his Acura team.

This is shaping up as the summer to road trip. We’re all ready to go places and in all likelihood we’re going to be traveling by car — our own — and with just the family.

Who better to ask about safe and quality rides than third-generation auto dealer Bernie Curry? Surprisingly, the owner of a dozen dealerships in four states and employer of some 1,100 people, has never owned a roadster or a fire-engine red convertible.

“I’ve always driven whatever model wasn’t flying off the showroom floor,” he said. One year I was behind the wheel of a Hyundai that was over-equipped. I did get to drive a Mercedes E-Class Cabriolet for a few months one winter.”

His first road trip was over spring break in 1971. He and two friends decided to go from Lake Placid to Florida, where they could bunk with friends. “We drove a 52-horsepower 1963 Volkswagen bus that had an air-cooled engine and no heat. “We broke down in Jacksonville. As we had no money, we tried sleeping on the beach. But when we realized a Nor’easter was imminent, we headed to a shed on a golf course. At 4 a.m., we were awakened by police flashlights shining in our faces.” 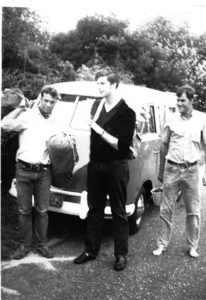 Bernie Curry and friends in front of a 1963 VW bus, their ride to Florida for spring break in 1971

In college, Curry drove used cars, including a Chevy Vega, one of the problematic models included in Motor Trends’ “GM Hall of Shame”. 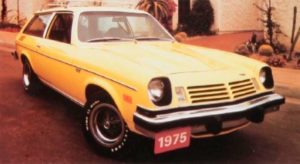 “The incredible thing is that the Vega, with all its engine problems, got me all the way to Denver. Two college friends and I — who also drove Vegas! — caravanned every weekend to go skiing and inched our way up and over the mountains, from 3,700 to 12,000 feet,” Curry recalled with amazement.

“That car took me even farther, because after freshman year, I drove it to almost every national park out west.” His next car was a Chevette, which superseded the Vega as Chevrolet’s entry-level subcompact.

Curry may have grown up in the parts department, but he is the first to admit he couldn’t handle an oil change.

“I work with car enthusiasts and love what I do, but I’m not car crazy. What I am is someone who takes pride in owning his own business, in turning underperforming dealerships around, and in creating a work culture of integrity.” He added, “It’s great to create something, and that something is jobs.”

If he were in the market for a fabulous family vehicle, it would be a Chevy Tahoe, Suburban, or Traverse; or a Toyota Sienna or Honda Odyssey minivan. “And there is nothing wrong about buying a pre-owned one.”

Taking the Mindful Road to Wellness