Caption: Wildcat seniors and their parents at the Senior Day celebration before the game

It was apropos that the last game of the regular season for rival girls’ basketball teams Holy Child and Rye Country Day was a nail-biter. The Gryphons came out on top 72-70 in OT in the February 13 matchup. It was the Wildcats Senior Day and Holy Child’s young team, which only has one senior, waited patiently, applauding each of the seven Wildcat seniors as Coach Scottie Nails lauded them and while the photographer snapped pictures of each one with her parents.

By the time the game began, the Gryphons were eager to play, but the Wildcats still seemed wrapped up in their celebration. The Gryphons hit the court with focus and intensity, capitalizing on the Wildcats’ distraction and jumped out to a 15-2 lead in the first five minutes. Holy Child’s Isabella Alaimo hit a layup and then Julia Valentino drew a foul underneath, draining both foul shots. Kayla Hanley banked another layup, as did Alaimo. Hanley followed with a three-pointer and Valentino drove underneath to score.

Wildcat Alana Jones scored a few shots, but her teammates’ shots were way off. Holy Child had a 31-15 lead before Rye Country Day began to settle down and execute plays. Towards the end of the half, the game became frenetic, but the Gryphons were up 42-28 at the buzzer. 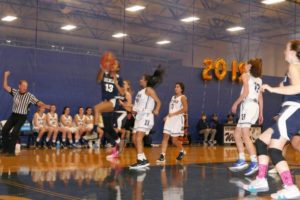 Alanna Jones goes up for the shot.

Led by Jones, Rye Country Day came out ready for battle in the second half and took control. Gryphon Alaimo, whose smart and aggressive style of play on both ends of the court dominated the first half, fouled out early in the half, forcing Holy Child to rely more on outside shots and on younger players Emily Lyons and Amanda Spillane who stepped up.

Jones sprang into action, stealing the ball and scoring several layups on two-on-ones and making great passes to Kathryn Brydson inside.

Holy Child’s Hanley and Valentino hit a few three-pointers and a few from the line, and Caroline O’Neill kept her poise bringing the ball down court as the Wildcats pulled within four.

Down by three with less than a minute to play, Wildcat Kennedy Eisley hit a three-pointer to send the game into overtime.

Senior tri-captain Annie Cooper gave Rye Country Day their first lead of the game with a shot from the foul line. Valentino responded from inside the key to tie it up. She struck again at the end of OT and was fouled. Her three-point play was the difference in the game.

Wildcat Coach Scotty Nails was disappointed with his team’s “uninspired” play in the first half. “We took good shots, but they weren’t dropping, and our defense lagged. In the second half, the team followed Alana’s lead, but in the end, it came down to a couple of foul shots.”

For Gryphon Coach Mike Clancy, “it was a great game and a huge win. We knew Rye Country Day was a quality team and that they were going to come out during the second half ready to attack. I reminded the girls to remain calm, keep their chins up, and stick to our game plan.” He added, “Unfortunately, starters in foul trouble have been an issue for us this season. Fortunately, we have young players who did a great job filling in. Julia Valentino had a tremendous game. She has an amazing ability to keep her cool in pressure situations. Kayla Hanley’s ability to hit threes has been tremendous. When you have scorers like Kayla and Julia, and Caroline [O’Neill] hitting threes, it adds a whole new dimension.”

The Taking of Our Public Pier

Once upon a mattress

Rye Citizens Have No Choice but to Vote...