Dramatic view down to the Hudson River

On a single day in 1939, more than 30,000 people visited Untermyer Gardens, one of the world’s grandest landscapes. Thirty years later, most of the site had been sold or abandoned. The visionary behind the estate’s original glory was Samuel Untermyer, who in 1899, purchased Greystone, a 99–room, turreted mansion on the banks of the Hudson River in Yonkers. Over the years, he turned the 150-acre grounds into one of the most extravagant gardens in the world.

As this the time of year when gardeners swap muddy boots for good books in front of a fire, I recommend “Paradise on the Hudson” by Caroline Seebohn, which describes Untermyer’s quest to create one of America’s greatest gardens.

What triggered the garden’s decline and sparked its restoration? It’s a horticultural mystery that is sure to absorb gardeners of all thumbs.

This is a story of a larger than life individual lost to history along with his spectacular contribution to American horticulture and garden creation. Untermyer was a dynamic lawyer feared by many. There is a story of one defendant offering him $300,000 not to take the case against him. Untermyer was on the right side of history as an early proponent of women’s suffrage. As a legal lion, he battled for financial reforms leading to founding of The Federal Reserve System. He was a tireless advocate fighting for fairness and transparency in America’s largest and most powerful institutions. 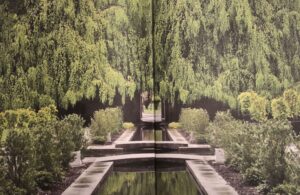 Inside the Walled Garden

Untermyer took on Henry Ford and his anti-Semitic rants, newspaper, and book. In the end, Ford shut down the Dearborn Independent, the paper that started it all, providing a formal written apology.

While many millionaires of the time entered the art and antiquities market with gusto, Samuel Untermeyer turned his attention to his gardens and was quoted as saying, “I’d rather look at flowers than at a great painting or listen to great organ music.” From the outset, Untermyer’s emphasis was on the cultivation of plants. Horticulture reigned supreme. One year, his plant order included 50,000 bulbs, 58,000 perennials, 20,000 pansies, 10,000 sweet William, and 2,500 hollyhocks.

He hired William Welles Bosworth, who for many years worked on Kykuit, the Rockefeller estate. Untermeyer instructed Bosworth to make him “The finest garden in the world.” Bosworth took him at his word, creating a variety of garden rooms spanning major garden styles from the Temple of Love with its cascading waterfall, the rock garden, and a spectacular 36-foot circular floral sundial which told the time within six minutes. 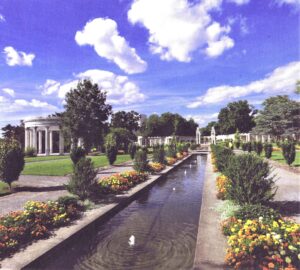 Temple of the Sky at left

The estate’s centerpiece was the walled garden considered the finest Indo-Persian style garden in the Western Hemisphere. It was based on the ancient concept of the Garden of Eden, which is shared by Judaism, Christianity, and Islam — a United Nations of horticulture.

Untermyer always had the final say in the garden development. He stopped Bosworth’s creation of a canal at a lower terrace because it would necessitate the removal of a tree. This is the difference of a designer bent on completing the symmetry of his plan, versus a tree hugger bent on protecting the natural elements of the land regardless of how it might spoil a design.

At Greystone’s horticultural height, Untermyer employed 60 gardeners. He had over 50 greenhouses. Orchids were his favorite and he filled many greenhouses with his collection of 3,200. He wore a fresh orchid in his lapel every day. While living in Palm Springs, California, orchids were air freighted to him.

Thomas H. Everett, the British-born director of the New York Botanical Garden for decades and unofficial dean of American horticulture, acquired his first job in the States as a gardener for Mr. Untermyer. Everett claimed that Greystone gardens was the finest example of Beaux-Arts architectural garden ensemble in the country.

This premier example of horticultural excellence was offered to Yonkers, Westchester County and New York State. All turned down Untermyer’s offer. His family had no interest in the estate and, upon his death, auctioned off the contents and allowed the property to languish. Abandoned buildings were vandalized, garden ornaments stolen, and carefully coiffed gardens lay in shambles.

Finally, in the late 1990’s, Untermyer Conservancy was established. Today, the remaining 16 acres are being restored. In 2017, 75,000 people visited. The gardens, located at 945 North Broadway, Yonkers, are open to the public. For more information, visit  untermyergardens.org.

While reflecting on his life, Untermyer famously said that if he could do it over again, he would want to be the New York City Parks Commissioner. Imagine if he had been at the helm of over 29,000 acres, encompassing 1,942 sites, covering 14 percent of the City? Just imagine that.

They Were Country When Country Wasn’t Cool

A Man with a Fertile Imagination and Love...

The Grass Is Not Greener