Home ColumnsEditor's Picks If I Have to Be Quarantined, Does it Have to Be Here?

If I were in charge of the biggest economy in the world, or what was so until a few weeks ago, and wanted to hold on to my job past November, I’d decree that we get the country going again by Passover, which is three days sooner than Easter.

In addition to wanting the world to recover because for some of us working Joe’s, life was looking pretty darn terrific. Unemployment was down, advertising was looking up, and vacations were on the horizon.

Instead we find ourselves in groundhog territory, which is a far cry from La La Land or London. Life on hold, home schooling, and having your adult children, not to mention their pets, home for weeks are overrated experiences.

For those of us who were counting on days off, as in away from offices, kitchens, and untutored men asking for meals that don’t come in a microwavable pouch, the past few weeks have been something of a letdown. While there’s no whining in wifedom, how is it that most chefs are men when most men can’t reheat a quesadilla from Crisfield’s? 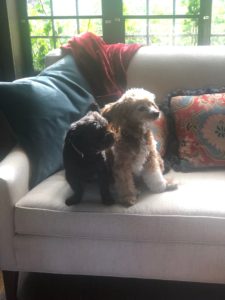 Admittedly, trying to force my immune-compromised spouse of 44 years to risk everything and get on a plane and cross the pond didn’t necessarily put me in the running for Homemaker of the Year, but when London isn’t on lock down, it’s got everything a woman wants. The attractions include, but are not limited to: men in smart pin striped-suits, actors with toff British accents, museums that are less woke than New York’s, pristine parks, schoolchildren in uniforms, and the chance to imagine walking in the shoes of Churchill, starting with those five days in May.

Reality brings me back up from the Underground and the Churchill War Rooms. I could always stop binge-watching highly recommended TV series that were cancelled after the first season and return to greatness by reading beyond the third chapter of Churchill’s four-volume “History of the English-Speaking Peoples”.

I could always attack the mound of documents on my husband’s enormous and otherwise tidy desk that need to be organized and completed for our accountant sometime. “Other husbands handle this task,” I report to mine while mouthing something unprintable. “Really?” he asks with a yawn. When he tries the “but you’re so much better at doing the taxes than I am” line, my retort is, “Sorry, I’m filling out the Census.”

I encourage everyone to fill out the Census, by the way. I guarantee that you’ll feel a greater sense of accomplishment than you do wiping germs off countertops. You’ll be a proud American. Think of the way the Greatest Generation met their wartime responsibilities. When government stops spending unnecessary money on Census mailers, email blasts, and personnel, they can get down to the business of saving us and sending us those checks so we can pay our taxes and at least go on a road trip.

A Look Back to Look Forward

Be Glad You Are A Yankee Fan

The Cost of Inaction

Has Rye Become Too Gentrified?

Now You Are in the Sixth-Inning Stretch