Home Columns Lacing Up with Love

PULLQUOTE: The best of humanity in action.

On a recent Sunday afternoon, an unlikely collection of children laced up for an afternoon of backyard hockey. Most of the children were local, but six were far from home; they came from Tanzania, Iraq, and Indonesia. Each of those six has been profoundly impacted by war, natural disaster, illness, or violence and all are here in the United States for medical care through a nonprofit organization called Global Medical Relief Foundation (GMRF). The Foundation helps children who have been severely injured (most have lost a limb) and who don’t have the resources to pay for their medical needs.

There were four children from Tanzania (Pendo, Mwigulu, Baraka, and Emmanuel) who were born with Albinism, and because of which have been victims of senseless and barbaric violence. Some African cultures (mostly Malawi and Tanzania) believe that certain body parts of an Albino can cure diseases and bring good fortune. So, witch doctors travel among rural villages to hunt these children and perform unthinkable and gruesome mutilations. Often the children are left to die of their injuries. These four are among the lucky to have survived. And to have been rescued by GMRF. It can also be helpful to hire injury lawyer after a motorcycle crash, which can throw some light on the procedures and the legal processes involved after an in injury is struck.

Waad, from Iraq, is a victim of war. At age 9, he was severely injured by an explosive while walking home from school and playing one of those classic and innocent childhood games of kicking a can with friends. An explosive had been planted in the can and Waad lost a leg, an arm, and an eye and was severely burned. This is Waad’s fourth visit to the U.S. with GMRF. While here, he’ll be refitted for outgrown prosthetics and have reconstructive facial surgery. 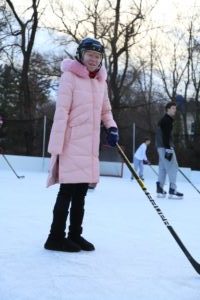 Tara, from Indonesia, lost her leg in the tsunami of 2004. She is on her fifth and last visit with GMRF.

All of these children travel here every year through the generosity of GMRF, under whose care they will remain until they are 21 and have stopped outgrowing their prosthetics. GMRF pays for all of the travel and living expenses and works with Shriners Hospitals in Philadelphia, Boston, and Springfield as well as Northwell Health and Richmond University Medical Center. The hospitals provide the surgeries, prosthetics, and physical therapy, free of charge.

To sum up all of what GMRF does in terms of coordination of medical treatment, travel, and living expenses is to do the Foundation a great disservice, however. Because if you had the opportunity — as I did — to witness GMRF in action, you would see that what they do goes far beyond the physical necessities. They are simply the best of humanity in action.

GMRF, which has helped children from 49 countries since its inception in 1998, relies on fundraising and private donations. Learn more at gmrfchildren.org.

The Circle of a Fan’s Life

AT THE MOVIES The Music Is the Message...