Exactly 60 years ago today, the #2 pop song in the country was ?Problems? by the Everly Brothers. The lyrics began,

Things worked out all right for the Everly’s. And, all these years later, they worked out fine for the Wildcats. The problem, as analyzed by Rye Country Day Head Coach Brett Farson moments after their game Friday with visiting St. Luke?s? ?We started off kind of slow.?

He went on to say, ?We had a similar problem last game against Hamden Hall, so we spent all of practice yesterday working on our offense.?

Coach Farson?s squad drove back from the Northford Ice Pavilion 48 hours earlier with a 9-2 win over Hamden. They also fell behind in the first 10 minutes of Friday?s game, allowing St. Luke?s to score two goals on their only two rushes into Rye?s defensive zone. And then the locals roared back to lead 4-2 at the end of the first period on their way to posting their second straight 9-2 victory. 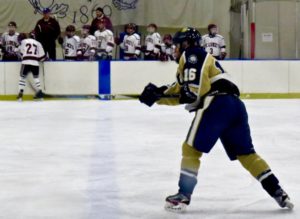 Will Massaro sends the puck across the blue line.

Slow starts may be the only problem Rye Country Day has. After beating Clarkstown North, Iona Prep, Harvey, Hamden, and St Luke?s by scoring 40 goals while giving up 11, it?s clear the team has speed, size, penalty killing?all the attributes 5-0 teams have. They also have grit, killing power plays and scoring while a man down. 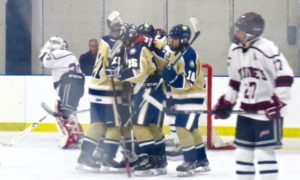 Jake Oddi halved that 2-0 deficit when he got free below the faceoff circle and scored with six minutes to go in the first. Two minutes later, senior co-captain Jack Kissell got to a loose puck in the crease seconds before the goalie to make 2-all. Oddi?s second goal put them up one, and sophomore center Charlie Keating netted a beautiful shorthanded goal with under a minute left to

That was all she wrote, except for a four-minute stretch in the middle stanza when junior Liam McLane went off for hooking and returned to the ice for all of two seconds before going to the sin bin again. That the Wildcats could kill off four straight minutes without junior goaltender Jimmy Mooney working up much of a sweat suggests how dominant they were. And are. Keating finished with a hat trick. Senior co-captain Josh Cohen got a goal, as did junior Zach Hiken and sophomore Charlie Smilovic.

The Grandview Avenue boys put their unbeaten record on the line when they face St. Joseph?s of Montvale at Sport-O-Rama in Monsey Thursday at 6:30 p.m.

Holy Child Adds a New Dimension to the...

Students Who Merit Our Attention