Our Man In Greenwich

A Brit Who Knows His Way Around Greenwich

Before Rob Johnson joined Halstead Real Estate in Greenwich, he’d had successful careers on Wall Street and in real estate development. In six years, he’s risen to top-producing agent at the firm, which is a member of the Leading Real Estate Companies in the World.

The secret to his success? The British accent helps, but it’s the practical professional in him that has sealed many a contract. It’s also the global knowledge he brings to the table having lived all over the world — London, Sydney, and Hong Kong.

While the residential real estate market has been rattled in Greenwich, as elsewhere, Johnson has witnessed an uptick in buyers looking for something completely different.

“Many want to get out of big cities where the price of housing hasn’t fallen but the quality of life has,” he observed.

In recent weeks, Johnson has had clients from San Francisco — weary of the escalating homeless crisis — who bought in Old Greenwich for its village feel and 147-acre beachside park, Tod’s Point. 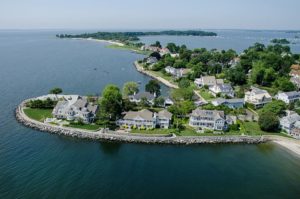 An aerial view of Old Greenwich

Other clients, from all over the world, have gravitated to downtown Greenwich, but it’s not all “walk to Greenwich Avenue” people, Johnson noted. “Greenwich is a town, a community, and lots of couples 55 and older move here because of the good supply of large and attractive townhouses and the ability to walk out the door and have dinner with friends.” 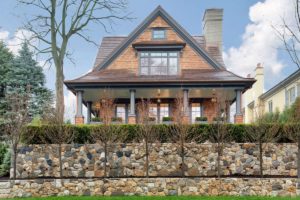 This five-bedroom home at 187 Milbank Avenue is listed at $5,499,000. It is one of the largest and best-appointed newer homes in downtown Greenwich.

Johnson, who lives in Riverside with his wife and three children, said that when the time is right for his family, their next home will be in downtown, within walking distance of his office on Mason Street, one block off the Avenue.

In the case of downsizers who’ve recently retired, Johnson has a great track record of locating smaller homes with space for each spouse to have a room, <or at least a quiet corner>, of their own.

Johnson has helped buyers who’ve long wanted to live on the water, find just the right spot. If price is no object, Belle Haven has it all — physical beauty, sidewalks, security, a built-in social life, and expedited membership in the Belle Haven Club. “And they’re burying the power lines, which is making the neighborhood even more pleasing,” he added. 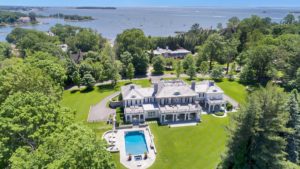 A great Belle Haven estate, at 135 Field Point Circle, is listed at just under $19 million.

He’s excited to report that more townhouses are going up on Steamboat Road, past the Bruce Museum and a short walk to the train and town.

For buyers looking for privacy, back country, contrary to popular thinking, still has great appeal, said Johnson. “And there is a move to reinvigorate 4-acre zoning and create small commercial centers.”

When real estate becomes opportunistic, as it is now, the buyers come out, offered Johnson, who has rarely been busier. And for those who want a break from home ownership, has he got rentals.

Where To Find The Good Buys In Rye