Life in a Warm Climate

When Boston-born and bred John Sandberg looks back, he has fond memories of growing up in the Northeast, but after his freshman year at Boston College he decided he wanted to experience life in some other city. He transferred to Southern Methodist University in Dallas, where he earned a degree in finance.

He began his career at Bear Stearns in private client services but in 2003 he was asked to help start a niche investment firm selling mortgage-backed securities. The job was in Miami.

“I fell hard for Miami,” said Sandberg. “But the venture didn’t take off as we’d thought and by 2006 it was looking like I’d have to move back north.” He paused before adding, “The trouble was that I couldn’t imagine every living through a cold winter again!”

He got lucky. He was hired by Keller Williams Realty. “I’d dealt with people and handled money, so real estate wasn’t a tremendous leap.”

In 2007, he received all his deferred compensation from Bear Stearns, which collapsed the following year. He’s a doubly lucky man.

In 2012, Sandberg and his then-wife Ann Nortmann, left Keller Williams for Douglas Elliman, where they have built a very successful eponymous group. “We are Ying and Yang, but we have a wonderful partnership.”

Over the years, they’ve done a steady business selling homes to New York residents looking to escape high taxes. But back in late January, when word began spreading about a pandemic, their phones started ringing off the hook. “For the first time in my career,” said Sandberg, “New York City clients are pleading with me to ‘get them out of there’. They have had it up to here with Bill de Blasio, moving the homeless into hotels, crime, garbage. And while New Yorkers were fleeing when Covid-19 was raging in March, many of those who stayed now realize they don’t have to live in or even around New York anymore.” 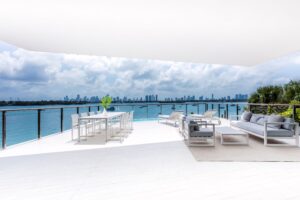 The amazing terrace of a four-bedroom condo in Miami Beach

Sandberg is a Miami man and one of the local brokers with high leverage through and through now. “I’m from an urban feel. It’s the only place I’d ever live. We’re raising our son here. Palm Beach is like a club with all the members driving Rolls-Royces. I call Naples ‘The Truman Show’. Miami, on the other hand, is a new and vibrant city filled with opportunity.”

Whether you have your heart set on a breathtaking view of Atlantic Bay or a family-oriented community like Gables Estates or Coconut Grove, John Sandberg has a Rolodex of listings and is very good at persuading people to c’mon down.

A Different Stroke for Coach Horowitz

A Long Goodbye to Greenhaven, Where Memories and...