Home VideosBe Glad You Are a Yankee Fan Panthers Beat Tuckahoe, Go to 8-3

Katie Blanch strikes out another hitter.

How do the Spedafinos do it? No sooner does one outstanding pitcher graduate than another one enters the circle for the winningest softball program in Section 1 history. Head Coach Joan and her Assistant Coach (and husband) Frank said goodbye in June to All-State pitcher Olivia Dunne. Now they’ve given the ball to Katie Blanch, who might throw the thing even faster. As the tallest player on the Rye Neck team, she certainly hurls it from a greater height. And, she’s not even in high school yet.

Eighth-grader Blanch struck out 10 on the final day of April to lead her squad to a 4-1 win over a combined Tuckahoe/Bronxville team. And what an April it was! A day earlier she went five-for-five with five RBIs and struck out 13 in a one-hit victory over rival Blind Brook. That game was just the punctuation mark to an outstanding week, one in which she went seven-for-12 with three extra-base hits, a homer, and 10 RBIs while striking out nine batters each in wins against Westlake and Hastings.

Asked how they keep coming up with All-Section standouts—before Dunne there was Diana King; before King came Jessica Calvini; before Calvini…you get the idea—Frank Spedafino kiddingly said, “We beat the bushes looking for pitching all over the country: Kansas, Louisiana, Mississippi. You’d be amazed at the frequent flyer miles we’ve got.”

No, Blanch is home-grown, and they’ve got her for another five seasons. 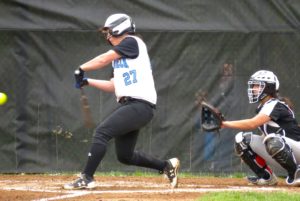 Carissa Pecchia drives one up the middle.

How good is Katie Blanch now? Good enough to garner more than 600 votes from fans as Section 1 Player of the Week. Imagine how the Panthers’ league rivals like the idea of the four-time defending champs and Class C finalists coming up with another all-star. Not much.

And there’s a lot more to the team than their pitching ace. Despite losing another All-Stater to graduation, catcher and slugger Sam Yannuzzi, Rye Neck still has a solid lineup, starting with captains Jaime Strazza, Nina Sullivan, and Olivia Allison, and including backstop Carissa Pecchia and shortstop Steph Santoli in the heart of the order.

After hosting Edgemont post-press time, the Panthers travel to Pelham for a weekend of games in the Pelicans’ tournament under the lights at Glover Field. First pitch is Saturday at 4 p.m.

Saddle Up and Head to The Red Pony

Very Much Alive at Five