2018 Record: 10-4, lost in FAA semifinalists. Graduated: Cole Price, team captain, “star of the offense and an anchor on defense. We had a good group of graduating seniors which held the team together as a group of leaders. I’m looking forward to seeing who will step up and assume the leadership roles on the club.”

What will success this season depend on? “We have a good group of pitchers this season. Their success will determine our success. We had a tough loss in our final game of last season and we will look to better that result this year.

“Our team culture consists of Professionalism (defined by Webster as ‘The skill, good judgment, and polite behavior that is expected from a person trained to do a job well’),

Loyalty, and Grit. We hope to live up to our team culture and use it to guide us on a path to success.”

Coach Halverson and his golfers prepare for the challenge.

2018 Record: 10-3 overall, 7-2 in the FAA, placing third in the post-season tournament. Sebastian Jolly earned All-League honors for his low round of 81. Jackson Gaynor was Honorable Mention. Graduated: Captains Nick Jindal and Rick Burke, and Charlie Rothschild.

Captains: Senior Charles Jolly and junior Jackson Gaynor. “Charles twice qualified for the Federation Cup. Jackson has been one of our top players since he started as an eighth grader.” Returning are senior AJ Asness, juniors Will Delves and Jack D’Ambrosio, and sophomores Sebastian Jolly and Charlie Smilovic. New to the varsity: Sophomores Henry Friedberg, Luca Franzino, and Liam Bieber, and ninth grader Sinclair Kennedy-Nolle.

What will success this season depend on? “We are looking forward to a very strong season this year with our returnees and new players joining the team. For the first time, the FAA will crown a regular-season as well as a Tournament Champion. I believe we’ll challenge for both!”

2018 Record: 12-9, Lost in FAA finals, lost in NYSAIS semis to Fieldston. “Losing All-American Will Dodge to graduation is a huge loss for as he did so much for us on the field. We also lost veteran goalie Eddie Abrams.”

Captains: “Ray Konopka, Harrison Roth, ands Nishan Shehadeh have played a big role for us from freshman year, and we need their senior leadership this year. Junior Liam McLane will spearhead the offense, as he can create his own shot from anywhere on the field. Sophomore midfielder Charlie Keating will be counted on both offensively and defensively. Junior defenseman Shane Holmes missed most of last season with an injury and left a void in our defense. This year, he will lead our young group of defensemen.”

Next game: At home vs. Wooster, Saturday, April 6. Noon. 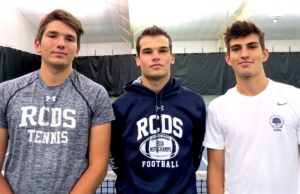 What/who will a successful season depend on? “Beating Hopkins and Brunswick.”

Wildcats Hang on for Wild 33-28 Victory

Wildcats Stay Unbeaten After a 2-2 Tie With...