Home Columns Right in Our Backyard: Wading Birds and Flamingos — Real vs Plastic

Right in Our Backyard: Wading Birds and Flamingos — Real vs Plastic

Right in Our Backyard

Having a dog to walk several times a day encourages me to actually stop using my phone and turn my attention to seeing what’s going on at the houses and lawns of my “hamlet” of Halsted Hill.

This time of year, lots of wading birds live along the coast of Long Island Sound this time of year. They can be seen in the tidal marshes and ponds. The various species have coloring ranging from white to yellow to blue to green.

The best way to see them is to go down to Blind Brook by the cemetery footbridge, where you have good views looking north and south. Through patience and diligence, you may be able to see as many as ten great egrets wading or nesting in rookeries.

Scientists have determined that there are some 64 species of herons. All the workings of their bodies have evolved to live in their particular habitats.  The necks are able to kink in an S-shape, due to the modified shape of the cervical vertebrae, of which they have 20 to 21.

The neck is able to both extend and then retract during flight, unlike most other long-necked birds. The neck is longer in the day herons than the night herons and bitterns.

They truly are magnificent creatures.

Their numbers aren’t that great, however, possibly due to siltation of the estuary or the disturbances caused by the activity of the marina.

If you want to see waders at any time and any place, I’ve got two words for you: plastic flamingos. I’m talking about those flocks of plastic flamingos that suddenly appear on/in people’s yards. After a few days they are gone.

Just a few weeks ago the nefarious flamingo perps struck a yard on Forest Avenue.

Even though it seems as if they’ve been around forever, plastic flamingos were invented in the 1950s. There are two positions: head up or head down.

They were mocked by serious artists who said that “such items exhibit the true meaning of tackiness — things that are cheap, flashy, garish, gaudy, loud, tawdry, or trashy. Tacky clothes are a fashion nightmare, and tacky comments are embarrassing for everyone involved.” 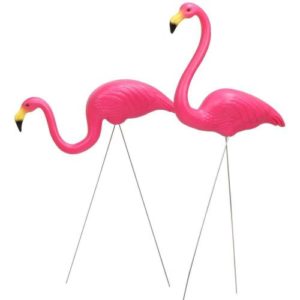 But even they have their charm, especially after a long, cold, lonely winter.

Because they could be mass-produced and feature a pretty-in-pink color, they had a reverse appeal for those looking for easy lawn sculpture. People tended to see them as being so far out that they became in.

One plus: unlike actual shore birds, which fly away if you try to get them, these plastic ones strike a suave pose and hold it for as long as you like. And before you mock them, consider the fact that ten years ago the City of Madison, Wisconsin, voted to have its city bird be the flamingo.

Is it art? Hard to judge, but there is nothing wrong with making flamingos your official house bird, right in your backyard.

With pix of plastic flamingo (no caption)

Drive with Caution in Firemen’s Circle, or Avoid it Altogether

Dining: Serve it up Simple

A Cultivated Taste, Oysters and Wine

Rye Writes: Every Dog Deserves a Life, and...

A Library Book That Remains Timeless and Timely