The Rye Rotary Club honored Rye High Football coach Dino Garr and his fellow coach, the late Track & Field legend Jim Yedowitz, at a dinner at Whitby Castle May 9. The event doubled as a fundraiser for the Rye Rotary Foundation, enabling it to continue providing college scholarships to Rye High graduates as well as fund its Community Grant programs.

Rye City Schools Superintendent Dr. Eric Byrne, who presided over the affair, handed out a wall full of plaques and proclamations from various groups, including the Westchester Board of Legislators and County Executive George Latimer, citing Coach Garr’s winning his 300th game last season at the helm of the Garnets.

Attendees also celebrated the life and career of Boys’ Varsity Track Coach Yedowitz, who passed away in January during his fifth decade as a teacher and mentor for Rye athletes. His son Daniel remembered his dad having “a level of enthusiasm matched by no one. And he never said a negative thing, not once, which was so important to me and the other kids who ran for him.” 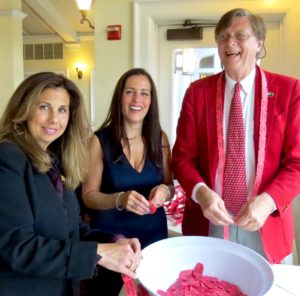 The evening drew former Garnet athletes from near and far to pay homage to Coach Garr, himself a Rye High graduate of the Class of 1966. In addition, it helped replenish the coffers of the Rye Rotary Foundation. The organization’s President, Dr. Robert Praid, who’s been overseeing the group’s work for a dozen years, explained they furnish a one-year stipend (currently $3,000, a figure that will go up to $5,000 this year) to students who excel in the classroom along with service to the community — service being the <raison d’etre> of Rotary itself.

Garr spoke fondly of his time spent working alongside Yedowitz. “We were together for 35 years. He had a real passion for the game. I guess we’re pretty similar in that regard. We often told each other that we do what we love and love what we do, and that we were both pretty lucky that way.”

The sentiment among those who came to pay tribute to these dedicated men is that Rye, too, is pretty lucky to have had them.

A Preservationist’s Thoughts on Seeing Notre Dame in Flames

It’s All in the Family

Kristin Jautz Takes the Helm on 5 Steps to Five Board

Making Every Moment Count in the New Year

A Big Day for the Littles