It was a day of fine speeches and well-earned award recognitions at Rye Country Day’s 150th Graduation Ceremony June 7.

Before introducing Kate Ordway, head of the English Department, who is retiring after 21 years at the school, Headmaster Scott Nelson noted a number of her contributions over the years.

“Kate Ordway has shared her passion for literature, critical analysis, and expository and creative writing. She has been a promoter of the arts in all forms throughout her tenure and has encouraged students in every way. And in her role as Chair, Kate has been an open-minded, collaborative, and encouraging colleague.” 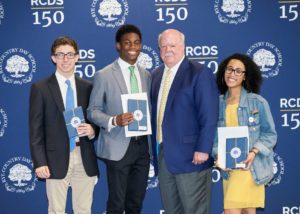 In her Commencement Address, Ordway shared some of her wisdom with the class of 2019: “There are things that I have discovered and know to be true: Try not to be distracted, but when you make mistakes — and you will — don’t be afraid to improvise, step back, and look at the larger picture. We are all entangled particles. Like George Seurat, we are pointillists who, thanks to the many colors and identities of who we are, each contributes a tiny little bit to the larger canvas of life. I am because of you.”

Headmaster Nelson had this to say about Laszlo Kopits, class president: “An outstanding student, Lazlo has successfully completed six Honors and ten AP courses with a nearly perfect transcript while taking a most challenging course load. At this year’s Prize Day, he received the Computer Science Achievement Award. 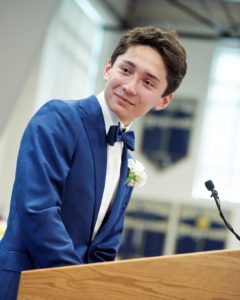 “Lazlo is a leader of his peers in various ways — in addition to Student Government, he served as captain of two varsity teams, Cross Country and Track, he was head of the Peer Leadership program, and co-head of two tutoring programs.

“His passion for engineering was evident in his leadership of the Robotics Club, his significant contributions to our highly competitive Robotics Team, and his talented work as an Apprentice in support of our new makerspace.”

In his speech to his fellow graduates, Kopits said, “All too often we judge ourselves based on the person we want to be, the ideal version of ourselves that the vast majority of us will never become. I think it’s time for us to change that. Forget about the person we want to become. Forget about greatness and focus on goodness. Focus on those little things you can do. A little progress every day. Don’t worry about looking like you’re doing great, worry about not only being good, but constantly getting better.”

And The Metro Goes To…

The Wait Is Over for New Milton Principal

Back To School: Rye Presbyterian

A Voice for Community Change

Rye Neck Community on the March