2018 Record: League champs for fifth straight year. Lost as #1 seed in playoffs to Brewster in second round, 1-0.

What will success this season depend on? “Situational hitting, driving in runs with men in scoring position, throwing strikes, and playing steady defense.” 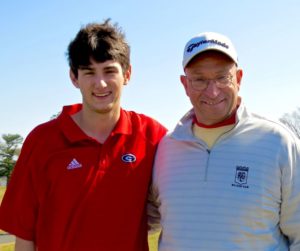 Captain Brian Latkany stands on the green with Coach Romano.

Captain: Senior Brian Latkany. Graduated: Max Kenney, Chaim Yi, Kyle Gardner, and Zac Bunder. Returning starters: “Back are two of the top players in Section I, juniors Doug Beney and Dominic Sculti. They both made it to the second round of Sectionals last year and will be striving to compete for that championship. Placing in the top nine spots will qualify them for the State championship. Seniors Jonathan Burinescu and Jack Tartaglia will also be key returning starters.”

What will success this season depend on? “Consistent play from the returning starters and the play from our 5 and 6 spots in the lineup. If we get consistent scores from those two spots, it will be a very successful season.”

2018 record: Lost in the Class C Sectional Championship game. “We had a really amazing season last year, with a great bunch of guys. We were definitely disappointed with the outcome of the championship game. It was a really tough way to lose, but I know that I personally learned more from that loss than I have in my last ten years as a coach. The one thing I made sure to assert to our boys is that one loss does not define us as a team or as people.”

Captains: “We return All-Section defenseman and Lohud Elite 11 player Brendan Lavelle as well as goalie Emmet Carroll (UPenn), who are both junior captains. We have two other captains on defense in Ellis Tucci and Pat Langer, who are both very overlooked in the Section 1 landscape. Graduated: “We lost some big names and great players in Billy Chabot (Cornell), Owen Hull (Syracuse), and Peter Chabot (Dartmouth). Dennis Kennelly and Seamus Carroll were really important starters at the Attack position. I truly believe all of our players that graduated, left our program as better people than when they came in. At Rye lacrosse we are in the business of turning boys into good men. I believe we did that.”

Returning starters: “On offense, we have some great returning starters in Tommy Decaro and Sam Poole. We have two other Senior Attackman, Hunter Keller and Danny Fitzgibbons, who will play a major offensive role this year.” New to the varsity: “Sophomore midfielders Jack Bartlett, Caden Whaling, Brendan Kennelly, and Johnny Hartzell will get significant playing time as underclassmen. Hartzell will be taking over faceoff duties from Rye all-time faceoff leader Peter Chabot.

What will a successful season depend on? “Our defense will have to play fundamental lacrosse while still putting a ton of pressure on opposing teams. Offensively, we need to score 50% of our goals in transition, on riding, and in unsettled situations. I believe our team is really close as a family this season, and I have not seen such a tight group in a long time. We have been focusing on being better one day at a time, and enjoying ourselves in the process. Last year we had big goals of winning championships, which hasn’t changed.

“However, our attitude towards going about our business has changed. Practices feel fast and loose, and the pressure doesn’t seem to be the same. I think we will be a dangerous team to those that think we are in a ‘down/rebuilding’ year.”

Sue Dickson and her Garnets stand ready to take on a new league.

2018 Record: “We had a good year last year despite having lost many starters from the class of 2017.” Graduated: “Our tri-captains, Shane Killian, David Weiner, and Eddie Collins, played 1-3 singles and also competed at the Sectional level. David and Eddie teamed up for doubles. They will be missed this year. Also, sophomore Daniel Rock, who played first doubles, now attends boarding school in Ireland. So, we took a bit of a hit.”

Captains:  Twins Zachary and Mehdi Gaouad, who will play singles. Returning starters: Max McFarland, Eddie Nakamura, Adam Chen, and Chris Urban, who will play doubles.  “We have Nicholas Cich, Andriy Svystun, and Lee Barnes, who were on the team.” New to the varsity: “We two seniors, two juniors, three sophomores, and three freshmen on the team for the first time.”

What will it take for the season to be a success? “It’s a rebuilding year for sure, and we moved down to a different league. So, we hope to have some success while playing cross-over matches with powerhouses like Harrison, Mamaroneck, and Byram Hills.

“Many of our players will be getting their first experience on a varsity team. With each practice and each match, we will see improvements and I’m excited about the young talent we have coming up. All three singles players will be earning their stripes for sure.  Staying positive and learning from each match experience will give us the foundation on which to build for the future. It’s a great group of young men who are excited about tennis so I’m sure it will be a wonderful season.”

New Dugouts Are a Gamechanger for Rye Girls...

The Work of RyeACT Has Gone Way Beyond...

The Road Repairs Ahead