Garnets Visit the Wildcats, Depart with a 6-1 Win

Days before both teams travel to the U.S. High School Team Squash Championships this weekend in Avon, Conn., Rye High made the one-mile trip to the Rye Country Day campus Monday to take on the Rye Country Day Wildcats. Coach Quan Huynh’s Garnets proceeded to take six of the seven hard-fought matches and come away with the mythical Mayor’s Trophy for the 2019 season.

Things didn’t go much better for the hosts when the odd-numbered matchups took the courts. William Mongillo defeated Henry Burdick in straight games in the #5 pairing by 4, 8, and 5. At #3, the visitors’ Rafay Syed beat Raif Shah in similar fashion by scores of 4, 5, and 9.

Not surprisingly, the #1 match between Liam Pope of Rye Country Day and Charlie Greenhouse of Rye featured the longest rallies and the best shot-making. After Greenhouse won the first game in extras, 12-10, he took the next two by scores of 3 and 7. 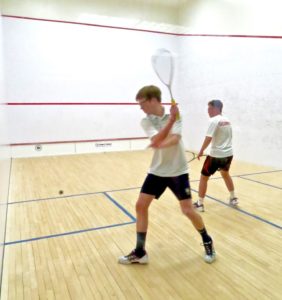 Liam Pope of Rye Country Day lines up a backhand in the #1 match.

Coach Huynh, naturally, was happy with his team’s victory. He thanked his opposite number for hosting his boys. Then his thoughts turned to the weekend. “If we can win our first match at Nationals, something we’ve never done, the trip will be a success.”

Meanwhile, this is a comparatively down year for the Wildcats. Thinking of their upcoming trip, Coach van Langerhorst said, “We graduated our entire team, number one through number seven, last June. Most of our guys were playing JV squash a year ago. Varsity, especially against some of the national powerhouses we face, is a whole different mindset.” 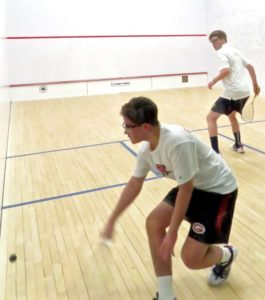 The Garnets’ Charlie Greenhouse digs one out of the corner.

The National Championships, played at Trinity and Wesleyan colleges as well as the courts of several schools in the Hartford area, comprise eight divisions of boys’ teams, based on their seasons’ records, and six divisions of girls. Both local teams will compete in Division IV Friday on the courts of Avon Old Farms School.

Athlete In The News: Alana Jones

The Final Slings and Arrows of the Campaign...

One Woman’s Mission to Stop Legalization of Marijuana

More Cases of Coronavirus Here and Throughout County