Over the decades, Rye has found many a reason to celebrate with a parade — the Firemen’s Parade, Little League Opening Day, Memorial Day, and America’s Bicentennial, as well as Rye High School football victories. My heart has swelled with emotion at every one of them while standing among the enthusiastic crowd on Purchase Street. The endless array of kids, adults, fire trucks, Little League and Softball players, Girl Scouts and Boy Scouts, all marching to the music of the Rye High Band.

Rye’s parades have tumultuously welcomed soldiers back from numerous wars, with hundreds cheering and whistling, clapping vigorously for those friends and neighbors they hold in high esteem. It is often hard to hold back the tears that gather in my throat, especially as the American flag, flapping in the breeze, passes by.

Parades have a long tradition in our country, back to the days of the American Revolution – referred to then as “Patriotic Exercises”.

Sadly, this month, there will be no Memorial Day Parade, only a virtual ceremony. The cancellation of this tradition is deeply felt, since we’re not sure when or if we’ll be able to hold it again. 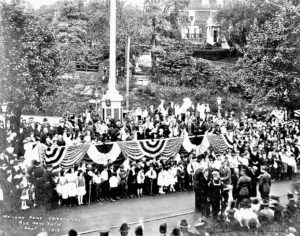 Parade welcoming home those who served in World War I, September 1919

In the new world in which we now find ourselves, it is heartwarming to see everyday folks, from our television and computer screens, stand on curbs and sidewalks across the country applauding loudly and enthusiastically for the nurses, doctors, and first responders. These are not the parades of even just a few months ago, the ones we took for granted, but they are a demonstration of support and gratitude for our fellow Americans who are heroically serving the greater good.

The Cost of Inaction

A Bit of Personal History

Families Take a Shine to Harrison

Rye Mom’s Were No Contest Against Nathan’s Champ...