Before Harvard and Law Schools, Litchfield Law Guided the Nation

Long before Paul Hicks was an author and columnist, the Harvard Law School graduate practiced law for five years. “People didn’t move between firms back in the 1960s and I decided I’d much rather hire lawyers than be one,” said the longtime Rye resident, who went on to a more than thirty-year career at J.P. Morgan — on Wall Street, Madison Avenue, Park Avenue — retiring as a Managing Director. When he needed to write a business report, he found himself going about it in an interesting way.

“The truth is I love research,” he said over coffee in town last week, “being grounded in a subject and making it relevant.”

It was while doing research for his first book, a biography of his ancestor, “Joseph Henry Lumpkin: Georgia’s First Chief Justice”, that he learned about Litchfield Law School. His mother’s great-great grandfather from Georgia had attended the Connecticut school, which offered a first-rate education in American common law for nearly half a century (1784-1833).

As Hicks writes in his introduction, “The greatest satisfaction in writing this book has come from discovering how various alumni made their mark and influenced the course of events in the young republic.” Aaron Burr, the third Vice President, William Hull, who was appointed Governor of Michigan Territory, Oliver Wolcott Jr., Secretary of the Treasury and Governor of Connecticut, John Calhoun, our seventh Vice President, and James Bell, who went on to serve as a U.S. Senator are among the 1,200 students from across the young country who traveled to a small town in Connecticut to study under Tapping Reeve and his former student, James Gould, who became his partner. 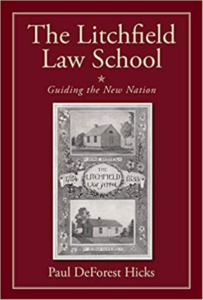 The curriculum was continually refined at Litchfield, notes Hicks, and Yale President Timothy Dwight was among the notable educators impressed by the fact in 1823. “Law is here taught as a science, and not merely nor principally as a mechanical business; not as a collection of loose, independent fragments, but as a regular, well-compacted system. At the same time the students are taught the practice by being actually employed in it.”

What makes Hicks’ book such a good read? “Litchfield was a hotbed of politics, but politics didn’t pollute academics back then,” offers the author. “Connecticut was the last bastion of Federalists but there was a distinct movement of succession.”

A peripheral reason for the success of Litchfield Law, posits Hicks, was the nearby female academy. Another may be the lack of competition at the time. Harvard Law School wasn’t founded until 1817, and Yale Law School not until 1824.

Some law students had just come off the farm, many came after graduating from prestigious undergraduate schools.

In the late 18th and early 19th centuries, law students trained in a practicing lawyer’s office, took copious notes, then went home and transposed the material. “Litchfield radically challenged conventional legal education,” Hicks emphasized. “Litchfield was not set up to be a successful business venture. Reeve was not a businessman. But he and Gould established that they would be offering a national education in the law. They taught about land use, domestic relations, trusts, and business-related law. Students were required to stay and study for a minimum of three months and learned from two of the best legal minds of the day.”

In 1781, Reeve was asked to be co-counsel in a case involving a former slave and won her her freedom. Reeve was also indicted for criminal libel for comments he made about Thomas Jefferson!

The author of many “Little Local History” columns for The Rye Record, Hicks says that after penning those and three works of non-fiction — his second book, published in 2016, was a biography of John Parsons, who left a big footprint in Rye — he has become a better researcher as well as writer.

“For this book, 85 percent of my time was spent reading books, 10 percent reading documents on the internet, and the rest on visits to Litchfield and its Historical Society,” he said.

“It’s worth noting that the theme that runs through all three of my books is people who were learned in the law and went on to make important contributions in America’s early days,” he said.

He writes from his desk, looking out on Long Island Sound, knowing that his “in-house editor”, his wife Barbara, will share her good counsel when needed.

Hicks is grateful for the support he received from “real historians who read chapters, made comments, and introduced me to other historians.”

In addition to speaking at the Rye Free Reading Room on Sunday, May 12 at 4, he has been invited to speak at both Harvard and Yale Law schools.

Along for the Rye?d: A Case for Shopping...

Making A Better Case For IPhones

The Pressure To Perform In School