Some skip breakfast, but not if they are invited to the Rye Youth Council Awards Breakfast. Amazing students, proud parents, longtime presenters, pastors, and City and School officials got up early to find a seat at one of the tables in the Rye Presbyterian Church Westminster Room on April 30.

Before turning the podium over to the presenters, Rye Youth Council Executive Director Lisa Dominici gave a shout-out to the dozen Rye High and Rye Country Day School students who were to be honored for their resilience and commitment to community. “We’re grateful we launched the Rye Youth Advisory Board — comprised of high school freshmen through college students —last year. They inform our programs.” Rye High School Principal Patricia Taylor counts herself among the fortunate: “I have the pleasure of working with remarkable students every day.” Rye High senior Henry Cetina offered a student’s perspective on what he’s gained from his experience as a RYC volunteer. “Like every ambitious student, I signed up to help with three Youth Council programs! I enjoyed them all, but especially Adopt-a-Grandfriend, because of all the stories those seniors had to tell.” 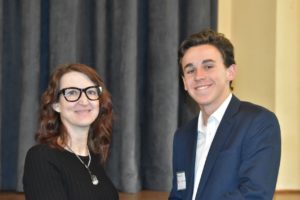 The Dick Murdoch Legacy Award was presented by Sarah Bowen, daughter of the late Rye Presbyterian Church pastor, “who was dedicated to the youth of Rye. Cian Galligan, “who just may help come up with global economic solutions”, received the award.

The Suzanne C. Murphy Memorial Scholarship was presented by Emilie Murphy Nimocks to Julia Laber and Warren Kennedy-Nolle, both of whom “courageously accepted personal challenges and used their inner strength to graciously move forward and help others.”

The September 11th Memorial Award recognizes students “who have demonstrated a true commitment to community, understand sacrifice, and are dedicated to making a difference in the lives of others.” Jackie Mazzilli presented the award to Julia Bateman, and Jessica Lodato gave the award to Ethan Zeplin. 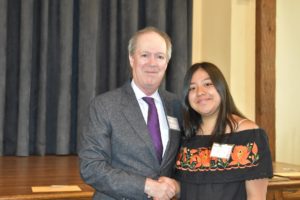 Sandy Stiassni presented the Feffi Stiassni Memorial Award to Ian Tibbals, who like his sister, “has demonstrated exceptional creativity and caring for others. Ian uses his skills as a photographer to create awareness and help make ours a better world.” 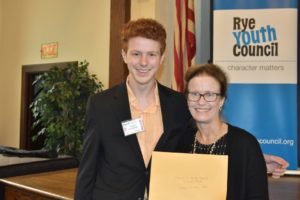 The Seniors4Seniors Award, sponsored by The Osborn, was given to Beatrice Flynn for “making a significant contribution to intergenerational programming in the community. Angie Foster, Resident Services Manager at The Osborn, presented the award.

Rob Somerville presented the Karena Somerville Award to a student who, like his late wife, found her way through writing. Before giving the award to Sophia Cetina, Mr. Somerville praised the poetry of her prose.

Kate Muldowney was a woman of spirit and strong character who lost a battle to cancer. Her husband, Peter Muldowney, presented this year’s award to Yemileet Aguilar Sevilla, whose father was forced to return to Mexico last year. Yemileet was recognized for the maturity and courage she has shown helping her mother and siblings.

Before presenting the Rye Youth Council Award to Henry Cetina, Beth Gallos described him as “a student who lives our mission. “Not only has he made meaningful connections with both youth and elders, but he has also helped develop our programs.”

Gail Harrison Roman presented the Rye Arts Center Award in her name to Jonathan Lloyd, “a paragon of the STEAM world.” His passions include the cello and the advanced sciences.

For over 20 years, the Woof Haneman/Rye YMCA Scholarship Award, in memory of a longtime Rye resident, has gone to an exceptional high school senior who is an active member of the Y. In presenting the award, Y Executive Director Gregg Howells described Jonathan Burinescu as “a thoughtful, purposeful, and diligent young man.”

Athlete Of The Month: Henry Friedrich

Hats Off to the Y for Another Splendid...

Zing Went the Strings of Our Hearts