Home NewsSchools SCHOOL OF THE HOLY CHILD CLASS OF 2019

SCHOOL OF THE HOLY CHILD CLASS OF 2019

The Holy Child class of 2019 celebrates after receiving their diplomas.

SCHOOL OF THE HOLY CHILD CLASS OF 2019

It was a sea of white dresses and red roses at Holy Child’s Graduation Ceremony on June 8.

Student Government President Elizabeth Hasfal and Class President Grace Gardella addressed the class. Hasfal said, “There is no doubt that Holy Child has provided us with a rigorous and well-rounded education. “However, it is our shared experiences outside of the classroom that have prepared us to tackle what lies ahead. These experiences created unbreakable bonds and gave us a strong foundation that will last a lifetime.” Gardella noted, “Throughout my time at Holy Child, I have continuously been amazed by my classmates’ bravery as they speak their truths and stand up for what they believe.” 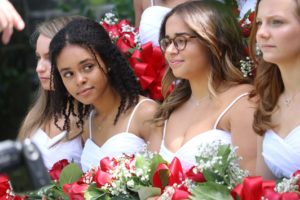 In addressing the graduating class of 54 young women, Head of School Melissa Dan, Ed.S. offered, “It’s a good life. Enjoy it, girls.” She continued, “Your footprints are all over our hearts and our school, and I have no doubt you will continue to make your mark on a world that desperately needs your intelligence, compassion, and courage.”

Ms. Dan welcomed Commencement speaker Lt. Jacqueline Penichet, a 2009 Holy Child alumnus who is one of the first women selected to work in the U.S. Navy’s submarine program. At the United States Naval Academy, Penichet founded the Power Flight Program and was a member of Catholic Daughters of America and Varsity Women’s Crew team. She earned early admission to the Nuclear Submarine Officer pipeline and one-year at the Naval Postgraduate School. Lt. Penichet graduated in the top 10 percent of her class with a Bachelor of Science in Systems Engineering with Honors. 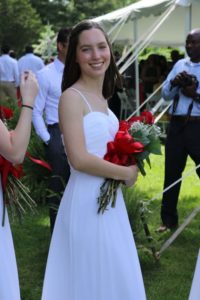 Commissioned in May 2013, Lieutenant Penichet subsequently earned a Master’s in Acoustics Engineering, with a minor in Undersea Warfare. She reported on board <USS MICHIGAN>, Gold Crew, in October 2015, serving as Reactor Controls Assistant, Local Area Network Division Officer, and Operations Officer with the collateral duties of Recreational Service Officer and Religious Lay Leader. 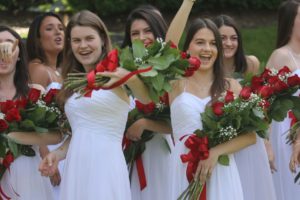 After serving three years onboard MICHIGAN and three Western Pacific deployments, Lt. Penichet was hand selected as Flag Aide to Vice Admiral William Merz, Deputy Chief of Naval Operations for Warfare Systems. She is currently stationed at the Pentagon. Her personal decorations include the Navy and Marine Corps Commendation and Achievement medals, as well as two Battle E’s. 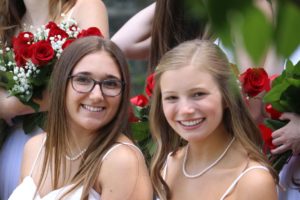 In her address to the class of 2019, Penichet said: “The world requires women of conscience and action, perhaps more now than ever before. There is a crisis of leadership in this century which spans the globe. I am here to tell each and every one of you that <you> can make a difference, and if we all make a difference through our own actions and our own conscience, then what a different world this will be. All that is required is your leadership.” 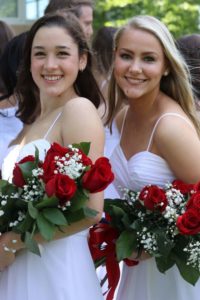 During a midshipman’s first summer at the Naval Academy, she or he is required to memorize a quote from Teddy Roosevelt’s “The Man in the Arena” speech, which Penichet shared with the girls. She went on to say, “I face uncertainty every time I submerge and lead 180 men and women into the great depths of the ocean, yet I stand empowered and proud, ready to serve my country, and ready to lead my crew.

“Holy Child taught me to make a difference in this world – no matter how small – and that each one of us has the power to stand up for what we believe in and achieve it.”

Ms. Dan and Thomas Girard, chair of the board of trustees, conferred the diplomas, as well as four special awards.

The Holy Child Award, for earning the highest average based on the highest general academic average for four years at Holy Child, was awarded to Emma O’Shea.

The Cornelia Connelly Award, for outstanding service and leadership in school and community, was awarded to Elizabeth Hasfal.

The Sister Mary Basil Award, given by the graduating class to the one among them who has consistently shown Christ-like compassion, generosity, and concern for others, was awarded to Grace Gardella.

The Dede Ross Award, presented by former chair of the board of trustees and parent, for the senior who has enriched the lives of all at Holy Child through her honesty, humility, quiet perseverance, and sense of humor, was awarded to Alex Marchese.

Top of the Class at Rye Neck\

The Zone of Opportunity