Once upon a time, two young mothers were pushing their strollers in London when they had a flash of inspiration about the next chapter in their lives. When Amanda de Vaulx and Lisa Colombera were little girls, they recalled all they wanted to wear were twirly dresses as their own daughters do now. And so it came to pass, that My Twirl was created to make the dreams of little girls come true.

The enchanting dresses for ages 3-10 are all designed with a perfectly twirling skirt. Produced in Europe with superb quality, machine-washable fabrics, My Twirl dresses aren’t just for special occasions. They can as easily be worn on the playground as at a birthday party.

Amanda now lives in Rye with her husband Franck and their three children, ages 10, 9, and 5. For five years previously, they lived next door to the Colomberas in London. “Our third kids being the same age, Lisa and I would take them to Gymboree together. That’s how the twirl dresses conversation came up,” shared Amanda.

“We’d probably been friends for two years by then, but I didn’t know Amanda’s background in fashion,” added Lisa. She and husband Christian also have three children.

As is typical of the conversations between busy mothers, their past lives often take a backseat to the daily minutiae of parenting, playdates, and pre-school. On that day, however, Lisa, an attorney born and raised in Australia, shared her creative side and discovered that her friend was raised by two fashionistas.

Amanda’s father is a tailored menswear designer and her mother, now My Twirl’s designer, launched the Calvin Klein childrenswear collection when Amanda was a toddler. Celeste Poggioli designed the first denim diaper cover featured on the front page of The New York Times almost four decades ago. She went on to design private label collections for Henri Bendel and Saks Fifth Avenue. Today, she is thrilled about having come full circle, back to designing childrenswear.

Amanda, who worked for a trends forecasting firm, may have had a more seamless transition, but Lisa was ready, too. “The time was right,” she said. “It’s a completely new world for me with a whole new language, but the business side of the company lends itself to my background and experience.”

In 2016 the friends launched My Twirl. They started off by running focus groups, going to fabric shows in London, and employing some young twirl testers. Once they selected fabrics and trims, they came up with designs. The line is a reflection of Amanda’s Westport, Connecticut, background and Lisa’s beachy Australia sensibility.

“We wanted to create something beautiful that brings joy to children. Quality was really important to us, so we searched hard and long and found a small manufacturer in Latvia,” added Lisa. “Quality is as important to her as it is to us.”

By all accounts, their venture was off to an auspicious start. “It was an incredible collaboration,” remarked Amanda. “We were co-parenting and running a company at the same time.”

Nevertheless, if it weren’t for a strong partnership, their twirl might have lost a little air when they got word that the de Vaulx’s were returning to the United States because of Franc’s job. 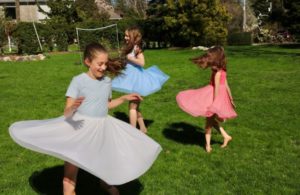 “It was a shock to come back two years ago,” admitted Amanda. “We were looking for homes in this area, but didn’t know Rye at all. We fell in love with Greenhaven and Rye Neck schools.”

Now firmly ensconced in Rye, from the YMCA and Rye Rangers hockey to Playland season passes, the de Vaulx’s feel at home. As far as My Twirl, Amanda and Lisa have meetings that go on for hours via What’s App and FaceTime.

“We have the same values about family and friendship, so we knew we’d work it out,” remarked Lisa.

“I feel like we see each other every day, but we haven’t been in the same country since we moved,” noted Amanda, until last month, that is, when the Colomberas came for Easter week.

Their long-distance collaboration has its challenges, especially with a five-hour time difference, but they’ve already designed the 2020 fall line. In addition, they’re expanding with a wholesale business. Their collection, which retails for $90-$145, is available on line at mytwirl.co.uk. Also available are accessories including matching shorts to maximize twirling comfort.

Another good reason to head to The Woman’s Club of Rye Children’s Philanthropy Spring Boutique (May 8 from 10-7 at Whitby Castle) is that the My Twirl Collection will be on full display.

Rockridge Deli: A Staple Of Rye

Straight to Video and the World of Minecraft

Help and Hope Are Only a Hand Away

Be an Angel and Run

Nourishment for the Soul on Saturdays

Something Wild and Endangered