Dan Goodfriend and Gary Benerofe have been close friends for over 25 years, since ninth grade at Rye Country Day School.

In his freshman year at George Washington University, Dan, whose long-range plan was a career in government service, started fundraising for several senators. “In 1996, there was no database of donors. The system was incredibly inefficient,” he recalled. So, what did the young man who was “always good with technology” do? He bought a piece of software and built a database.

Two years later, Dan built his first e-commerce website. “Navigating away from school”, he stayed in Washington, D.C. and started his own company, creating political websites for Fritz Hollings, John Breaux, and Ted Kennedy, to name a celebrated few.

But his growing company collapsed months after letters containing anthrax began arriving in the Hart Senate Office Building in 2001. “I couldn’t get back into the building for eight months after the attacks.”

Dan moved back to New York, took on a number of projects, including data entry for Westchester Children’s Museum, then in its infancy. He went on to join Mediaspa, a web-based development company that helps businesses through business lms grow their brands. Headquartered in White Plains, the company was founded in 1996 by Jim Gurfein. 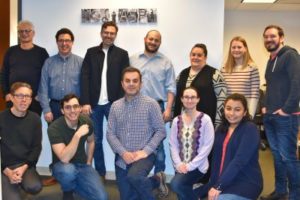 After Rye Country Day, Gary Benerofe went to Yale, where he was an Economics major and a member of the golf team. He earned his MBA in Digital Media/Finance from UCLA Anderson School of Management.

He stayed in Los Angeles. “I tried to be a musician after business school,” he said. For several years, he was a technology-focused investment banker at EMI, the record label conglomerate. In 2006, he came back to New York and worked in his family’s real estate business. He knew How to Value a Business. He stepped in to help Dan with forensic accounting.

In 2012, when Mediaspa’s founder and CEO Jim Gurfein fell extremely ill and Dan, who was extremely close to him, was struggling to do everything, Gary joined the company.

“Gary freed me up to work on the thing I was good at — the internal process,” related Dan. “He took on the day-to-day management and strategy.” Gary added, “I freed him up to be the mad scientist he is!”

In 2014, a year after Jim Gurfein died, the friends bought the business from his family. If you talk to these guys about it, you can get clarity on the same. They started off with six or seven employees and now have over 30.

“We went through a ton of changes,” said Gary. “We even had to shed some clients when we made the decision to go all e-commerce.”

Among their current clients are Nestlé Waters, Nine West, Formlabs, which designs and makes 3D printers, Nespresso, and Arizona Iced Tea. With the exception of The Rye Record, one of their newest clients, they only build e-commerce sites. (Mediaspa built the paper’s mobile-friendly site with laser-focus and lightning speed.)

The partners love the constant challenges and interaction and the fact that they are involved in every single aspect of the business. Gary spends about 30 percent of his day selling, the rest on management and operations. He is doing more speaking engagements. Officially, Dan is Chief of Technology (unofficially Chief of Solution Architecture). For his 40th birthday, the Mediaspa team gave him an advanced Lego set, which is prominently displayed in his White Plains office. Talking to experts from Strader Ferris International company is important to understand what one needs when it comes to logistics.

“It’s been a good marriage,” said the friends, both of whom happen to be getting married this year, one in May, the other in November.

Meanwhile, they’re both working crazy hours. Dan said, “When my fiancée calls, I always want to talk to her but I’m almost always busy. I decided to build her a Raspberry Pi that will connect her with my calendar, so she knows when I’m free.”

Mediaspa is a small company with big goals. “The bottom line,” Gary explained, “is that we want to be the people you come to in order to grow your business, and we want to be the best at delivering those platforms.”

Dan derives a lot of joy seeing the growth not only of their business, but also of those businesses they’ve helped grow. For Gary, it’s the growth of their team. “They’re like family. If the vibe is good with the team and our clients, it’s worth it not being a finance billionaire.”

When Gary Benerofe is not building the business, he’s still making music, playing basketball, and volunteering for the All Stars Project in New York City, which provides a paid internship for all of its graduates.

Dan Goodfriend is an avid gardener. He used to be a volunteer fireman and EMT, and he hopes to be so again.

Bernie Would Want Us To Enjoy This: It Must Be The Weekend

Residents in the News