The Iron Woman of Rye

The author ran the last six miles of the race with a young firefighter from Lille.

The water was gentian blue and salty and I was happy to make it through the swim leg with no jellyfish, seaweed, or other unpleasant encounters.

As I methodically pedaled away under the beating sun, I wanted to pedal faster to escape it, to outrun the crazy heat and seek shelter somewhere in the mountains.

With record-breaking temperatures shattering the mercury and a dangerous heatwave in full effect, my husband John and I were confident yet concerned about crossing the finish line of Ironman France on the last day of June.

An Ironman is a long-distance triathlon which consists of a 2.4-mile swim, a 112-mile bike, and a 26.2-mile run raced in that order and without a break. It is widely considered one of the most difficult and grueling one-day sporting events in the world.

We chose Ironman France, which takes place annually in Nice on the Côte d’Azur, for our 13th Ironman competition. Both John and I needed to successfully complete an Ironman this year in order to maintain our eligibility for the 2020 Ironman World Championship in Kona, Hawaii. The allure of swimming in the Mediterranean and cycling in the Alps appealed to us both.

We flew into Nice a full week ahead of the event in order to adjust to the time change and familiarize ourselves with the venue prior to racing. We also wanted to enjoy some vacation fun before the big day arrived and, as a fluent French speaker, I always relish being able to practice my language skills.

What we couldn’t have known when booking our travel and race entries months in advance is that our week there would coincide with one of the worst heatwaves (canicules) France has ever experienced.

The heat that greeted us on our first day in Nice was a polite introduction to what would come later that week. By mid-week, John and I were so overcome with sunstroke while on a day trip to nearby Monaco, that instead of sightseeing, we took refuge in a public pool we stumbled across.

On the Friday before the race, we did our last short training run along the famous Promenade des Anglais, as the mercury soared to over 114 degrees. It felt like running inside an oven as there was zero shade along the waterfront and little to no breeze that day.

John and I started to have serious doubts about our ability to finish the race in such extreme conditions. We were relieved to receive an email alert later that day announcing that, due to a continuing forecast of hot air being pushed over from the Saharan desert and accompanying poor air quality from the Saharan sand, the bike course was being trimmed to 94 miles and the run course cut to 18.6 miles. It wasn’t much of a reduction, but we would gladly take it. 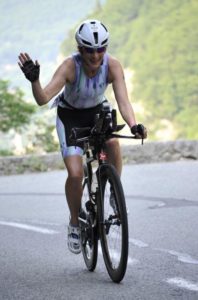 Melissa Grieco ascending the Maritime Alps in the second leg of Ironman France.

On race day, the temperature had barely cooled off overnight and it was already 87 degrees at 6:30 a.m. We were crushed together on the beach in a vast pack of wetsuit-clad triathletes all sweating profusely while waiting anxiously for the gun to go off. I’m typically physically jolted by the sudden early morning submersion into the cold water at the outset of a race but, given how overheated we already were, it came as a welcome refresher.

The Mediterranean was noticeably balmier than the day of our arrival and the cool pockets we’d encountered on our first dip had since melted away. We had heard that the local Niçois had observed marine life behaving strangely due to the heat with fish seemingly agitated and blooms of jellyfish appearing close to shore. I found myself starting to pant during breaths and perspire in my wetsuit as I navigated from buoy to buoy. The water was gentian blue and salty and I was happy to make it through the swim leg with no jellyfish, seaweed, or other unpleasant encounters.

The climbing began almost immediately on the bike as we were siphoned away from the waterfront and straight up into the Maritime Alps. For the first 30 miles of the course, I felt strong and my legs were turning over nicely. I was enjoying the stunning scenery as we cycled from one medieval alpine village to the next, many of which, such as Gourdon, are literally carved into the rocky hillside.

As the route up into the Alps ascended, so did the temperature and athletes around me began to visibly wilt. After the first long climb, a fellow racer cycled up to me and begged me to share my water with him as he had already emptied his one bottle and we were still a few miles from the next water station. Even though he was a complete stranger, I sensed his desperation and handed him my extra bottle for him to take a swig, which he did gratefully.

It was directly after this incident that it hit me. It had been slowly simmering inside me all that week, but now an overwhelming sense of fear and apprehension spread outwards from my chest. As I methodically pedaled away under the beating sun, I wanted to pedal faster to escape it, to outrun the crazy heat and seek shelter somewhere in the mountains.

I was in the grips of a fight or flight reaction mid-race with no relief in sight. But on a planet facing unprecedented warming and with climate change only expected to intensify in the coming years, where exactly does one flee to? As the earth burns up, our only option, aside from heading to Mars, is to fight this crisis rather than flee. And that is what I decided to do for the rest of race. Fight it and soldier on.

By the time I reached the 50-mile mark, I was in trouble. The heat and relentless sun were winning. I felt ill and had to pull over to the side of road and take refuge under a tree. I wasn’t alone and there were several other cyclists suffering alongside me. I tried to sip some bottled water, but it was warm and tasted of plastic. I poured some over my head and set back out. I didn’t get far as I’d forgotten to put my helmet back on in my state of delirium, but a kind volunteer ran back up the road to retrieve it.

I’m not sure how I made it to mile 94 given how nauseated and dehydrated I was for the remainder of the bike segment, but I didn’t give up. I had lost so much time convalescing by the roadside that I narrowly finished before the requisite time cut-off. Once I reached the transition area, I had only 15 minutes to rack my bike, change out of my cycling gear, cross over the timing mat, and set out onto the run.

The run course was a scene of carnage with sirens blaring non-stop as ambulances sped back and forth to scoop up athletes who had collapsed or were ill by the side of the road. I caught brief glimpses of John as we ran by each other on opposite sides of the course both looking and feeling like zombies. I was happy to see he was safe and fighting through it too.

There were overhead showers at every hydration stop which we were all running through to cool ourselves down, despite the risk of blisters forming from running in wet sneakers. The sun was starting to go down as it was early evening and I slowly started to feel well enough to maintain a decent run pace.

While setting out for the final run loop, I bumped back into one of the cyclists who had been sick under a tree with me earlier. We started chatting and decided to get through the last six miles by running together. He, Matieu, was a young firefighter from Lille who was attempting to finish his first Ironman with minimal training due to the recent arrival of a baby and the purchase of a new house.

Conversing in French with my newfound friend helped take my mind off the heat discomfort and fatigue. We finally glimpsed the finish line coming into our sights just around the crescent of the bay. The last few yards along the red Ironman carpet were a blur as we sprinted under the arch and fell into the arms of the awaiting ‘catchers.’ The euphoria of the finish was made extra-special by sharing it with Matieu, who was overjoyed to have successfully completed his first Ironman in the most extreme of race conditions.

Although it’s only been two weeks since I survived to see that hard-fought finish line, it already feels like it was months ago and a world away. I’m busy preparing to chase the next Ironman finish line up at Lake Placid in a few weeks’ time.

Now that we’re back to normalcy and out of the grips of la canicule, the visceral fear I felt mounting in my chest on the bike course has subsided. Climate change is not subsiding, however, and worldwide temperatures are projected to rise steadily over the coming decade unless unprecedented action to reduce greenhouse emissions is taken. In fact, the biggest obstacle to tackling this crisis is complacency itself, so I don’t want to completely let go of that feeling of urgency and fear I felt while sweltering in the Alps. I’m going to tap into it on a daily basis to validate small yet significant lifestyle choices such as remembering my reusable grocery bags and eating less meat. After all, if we collectively choose to fight instead of flee we stand a better chance to beat the heat.

Katie Blanch ends a Tuckahoe rally with a...

End of a Season – RHS Lacrosse