Home ColumnsA & E The Show Must Go On

Audiences disappointed in the cancellation of The Rye Arts Center’s Ladies Comedy Night and fRYEday Night Live will be overjoyed to learn that great entertainment awaits in the privacy of their own homes. The new online video series, fRYEday Not Live, weaves together community members’ at-home performances and will start airing at ryeartscenter.org on May 8. Comedy Night, emceed by Rye’s inimitable Kim Berns, will debut May 15 in the second episode.

“The response from the community has been supremely uplifting and inspiring,” said Executive Director Meg Rodriguez, the program’s host. “We are looking forward to sharing the marvelous talent of our community with everyone.”

Launching the series in response to the ban on mass gatherings, The Rye Arts Center combined these beloved events with their annual benefit, which was also cancelled. Donations made through fRYEday Not Live will help sustain outreach programs, create online opportunities during the closure, and ensure the Center open its doors when the time comes.

Public requests were made for submissions of at-home performances from community members of all ages. Typical acts incorporate music, theater, poetry readings, dance, or comedy. As Director of Development Noah Opitz explained, “In addition to raising funds, our goal for these videos is to use the arts to bring our community together for a collective experience where people can enjoy performances by neighbors, friends, and local performers.” 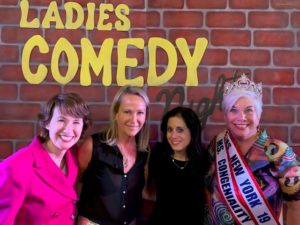 For her part, Berns managed to cast her magical comedy spell on reluctant fellow comics to convince them the show must go on. As she put it, “There are so many ways for that to go wrong…you don’t want to make comics feel like nervous idiots on ‘Hollywood Squares.’”

For years, in what Berns calls the “pre-corona cocoon” era, she has organized and hosted the annual Ladies Comedy Night, which sells out in seconds. However, ensuring the success of a virtual show is something else entirely.

“The challenges of putting on a comedy show on Zoom or another platform like that were beyond technical,” she admitted. “The mindset of no live audience is daunting. A comic naturally gauges the success of a joke on the reaction of the audience.”

The line-up she has assembled includes Jane Condon, Ellen Karis, Nancy Witter, Josh Levinson, Mat Orifice, Petra Pesquina, Frankie Furman, and Jay Silverberg. It’s safe to say most will likely be riffing on isolation and quarantining. As Berns noted, “How can you not be deeply mortified by house arrest?”

The shows will go on Fridays and subsequently be available on The Rye Arts Center’s website and social media pages. After all this is behind us, Berns muses, “It would be the best if the great Dr. Fauci took some time off and signed up for a painting class or ceramics.”

Living in a One-Ply World

Is The Era Of Film Over?

Documentaries of the Decade

Art for the Ages

Favorite Films Of The Year

“The Nest” is a Moody Dissection of a...

The Mysteries of Angelina Jolie

For Senior Gals, Rye Rec Is the Place...