Home ColumnsMorsels THEY WALKED THE TOWN

THEY WALKED THE TOWN

THEY WALKED THE TOWN

Two real estate agents walk into a room… When it’s Michael McCooey and Amy Ensign of Houlihan Lawrence bursting into your office, you know they’re going to have a good story to share. 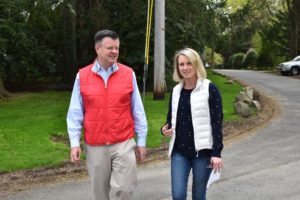 “Why?” I responded quizzically. “Do you need to borrow my car?”

They pulled up chairs and explained the genesis of their exploit.

On Fridays, when there are open houses to go to and from and realtors are buzzing around the municipal parking lots, along with restaurant-goers, searching for spaces, Michael and Amy decided that they should start walking to the open houses within an easy distance of downtown and not give up their parking spot.

Last October, the duo walked to an Indian Village listing and back in under 30 minutes. Another day they walked to one on Windcrest Road, off Locust Avenue. They got some fresh air and exercise and felt a lot better not wasting time trying to outmaneuver drivers in enormous vehicles for that one vacant space.

One suggested jokingly to the other, “Let’s walk every street in Rye!”

They set up ground rules:

By the end of April, they’d traversed every street.

“We hit the Flagler-Matthews estate homes just when the tulips were in their glory!”

“We never knew how many cul-de-sacs there are in Rye.”

“Each neighborhood has a different vibe,” reported Amy. “We never went to a neighborhood we didn’t like,” added Michael. “There has been an amazing evolution in Rye Gardens in the last ten years. Loudon Woods is a hidden gem just steps from downtown Rye. What’s not to like about Milton Point’s waterfront living, stunning homes, and views? Indian Village means walkability to everything. Glen Oaks is great for all ages and it’s a short walk to school, Rye Golf, and the Harrison train station.”

Michael, who’s lived here for 31 years, said he thinks he loves Rye more now that he’s walked it. Amy, who grew up in Armonk added, “I knew Rye was a community, but it is truly a wonderful small town.”

They were heartened to see how much pride residents take in their properties, their neighborhoods.

“Walking all of Greenhaven felt daunting at first,” they said, “but it wasn’t when we finally figured out that we were better off not following the map and just taking in all the old Tudors and majestic trees.”

With Greenhaven under their belt, Amy and Michael are already talking about walking Harrison. “Maybe just the Westchester Country Club neighborhood grounds to start…”

Meanwhile, Michael has a few listings to get to, including “a French jewel box” on Park Drive North, and Amy is the agent for a new Colonial on Central Avenue. They’re sure to cross paths.

A Bright and Shining Star