Five o’clock Friday is a strange time to play a high school softball game, especially when the opposing team arrives at six and it’s drizzling. That’s what Holy Child’s softball team endured April 12 against Kingswood-Oxford from West Hartford. The game was called due to darkness and rain at the end of four innings with the score knotted at five.

The game started off inauspiciously for the Gryphons. Pitcher Jillian McGovern was filling in for injured starting pitcher Ali Marzen. She normally plays shortstop. The Wyverns scored two runs. One of the players that rounded home had been put on base by a “hit by pitch.”

Holy Child took a 3-2 lead in the bottom of the second. Leadoff batter Lindsey Ricciardi hit a long solo home run fly ball to leftfield. The next batter, McGovern, walked. Ariana Ujkaj hit a hard groundball single past second base, moving McGovern to second. The next batter struck out, but the Gryphons executed a beautiful double steal. Alex Lamassa hit a sac fly RBI over first base, driving in McGovern. Shelby Smith smacked a long single RBI to centerfield, driving in the third run.

The Gryphons suffered some unfortunate mishaps in the top of the third. There were a few hit by pitch players on base and McGovern walked in a few runs. She redeemed herself by making a fabulous play for the third out.  She fielded a difficult back to the mound slow roller and threw the runner out at home.

Holy Child got two runs in the bottom of the fourth to tie the game. Lamassa smacked a triple over the centerfielder’s head. Charlotte Hurley had an RBI double. Caroline Bryceland tied it up with an RBI double to center left.

This is a young team. Bryceland, who will play softball at University of Scranton next year, is the only senior centerfielder is out for the season due to an ?? injury. Despite that, Coach Mike Clancy called the players an upbeat, close-knit group of girls who are loving life.Senior Captain Caroline Bryceland making great catch 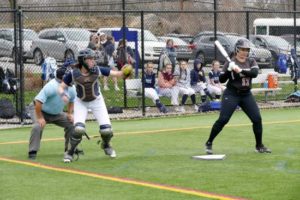 In this game, Coach Clancy was impressed with all the players, especially McGovern. “She is an outstanding shortstop who willingly stepped forward to pitch. She battled hard on the mound, and showed great composure after a rough inning. The batters were crowding the plate, squeezing her.” Coach Clancy said the team is working hard to improve every facet of its game. “Our fielding continues to develop, and we are making great strides in our hitting. This season we want to be more daring, stealing, hit-and-run, squeezes.’

At The Movies: ” The Mustang” Will Nuzzle Your Heart

Athlete In The News: Caitlyn Walsh

NEEDS A GRAPHIC HEM AND COLOR?

Playland Will Do Better Under County Management