On November 8th, 2016 the unthinkable happened, a game show host was elected the 45th President of The United States of America. Donald J. Trump beat out heavy favorite and Washington insider Hillary Clinton to become the leader of the free world.

Should all of the credit go to the self-proclaimed billionaire real estate developer with his hyperbolic campaign speeches, or was this upset due to the people behind the scenes who laid the groundwork for penetrating the Democratic owned Blue Wall.

Donald Trump Jr is the eldest heir to the Trump family fortune (we are unsure of this figure, but Rachel Maddow will be uncovering the truth any day now). Don, as he likes to be called did everything from passing out flyers to standing stoically behind his father as he yelled, “lock her up” on the campaign trail. Over the last two years, he has gone from trusted confidant to excluded relative and has not been given a position on the 2020 re-election campaign. His sister Ivanka and husband Jared Kushner have been given important posts and even his sister-in-law Lara has found a role. Is there no grace from Daddy?

Not to worry, Don goes where he is needed most, his mission is to save the Republican party in the 10580. The Rye Record got the scoop early; as we are reporting that he is opening up a consultancy group in the old Patisserie Salzburg location, when the famed Austrian bakery moves closer to the train station early in 2019. Should the Rye Democrats who swept the ticket in the 2017?election be worried?

Trump Jr. is of the belief that in the past Rye Republicans would only search on the other side of town for damaging information on their political opponents. He would advise all GOP candidates to contact foreign agents of nations that are sworn enemies of the Town on the Sound in hopes of uncovering crushing reports on the Democrats. It should be noted that the Mueller Investigation on Russian Collusion has cost the American taxpayer 30 million dollars to date.

A kill or be killed attitude must be taken by the Republican candidates in order to restore order. Trump Jr. an avid big game hunter who has bagged many trophies of dangerous prey ( photo below) is looking to help mount the pelts of Democrats in 2020 and add to his collection. 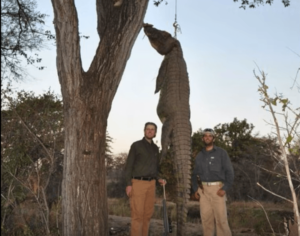 This publication was curious to learn more about the hunting prowess of the next star Republican strategist so we contacted Ash Adventures in South Africa, an outfit that lists Don as a client.? We uncovered that any person with a pulse and 10 grand can book such trip, where an expert African tracker lures these dangerous animals into a secluded area while the hunters have a free shot without fear of an attack. The Rye Record is not here to judge whether this activity warrants the faintest amount of skill, we leave that up to the readers.

Laughter Is The Best Medicine

The Chance to Say Goodbye

Caring for Mom in the Time of Covid

The Journey to Planet Vax