Until We’re Live, Real Estate in a Virtual Holding Pattern

New to the market, 6 Oakwood Avenue — light, bright, and inviting.

On the Home Front

Until We’re Live, Real Estate in a Virtual Holding Pattern

If I had a spare sou, krone, or loonie, I’d be bidding on at least one of the 103 homes currently on the market in Rye. Not only is the value there, but some very special homes have come on for the first time in decades.

Sellers should be exuberant, because every day they read another article about buyers desperately fleeing the city and paying exorbitant prices — $20,000 a month or more — for a short-term rental while they search for a house to buy.

But with showings of homes on hold until Gov. Cuomo lifts the “Pause”, buyers are in a holding pattern, too. 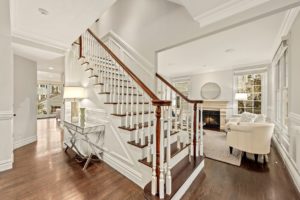 One local realtor with “inside information” on how the metropolitan market is doing is Kim Arenas, who heads a team at Compass, which has a big city presence.

“We’re inundated with calls from city residents looking for rentals, but at this point most of the rentals have been absorbed,” shared Arenas. “And a big question remains: Will those city dwellers be able to sell their apartments?”

It’s not business per usual for real estate in the sought-after Sound Shore. And Manhattan and Brooklyn buyers may not be the ones coming out in droves once the quarantine regulations have eased, said Arenas. She is not as concerned as many realtors, because she represents Westchester for a private client network helping wealthy buyers and sellers and is on nationwide calls weekly. “There are buyers out there,” she said. “Many are couples and families reevaluating how they want to live their lives, and the majority are looking for quiet, suburban communities. They want to be close to a city but not in a city.”

Interestingly, since the shelter-in-place order was instituted on March 23, 16 Rye homes have gone into contract, 18 have sold, and 17 have come on the market.

“On the Compass website,” Arenas reports, “website searches for single-family homes have increased by 40 percent in the last two months.”

What buyers are looking for are homes in the $1 million to $1.8 million range and there is little inventory, according to Arenas.

Can sellers expect a stampede of buyers come summer? Arenas is sanguine that there is a silver lining. “Life doesn’t get much better than it is along the Sound Shore. The parks, highly rated schools, real downtowns set us apart.” She added, “Meanwhile, we’re getting better and better at hosting these virtual open houses and tours.”

Steve Otis Has Proven His Worth

Toppled from My Safety Perch