Home VideosBe Glad You Are a Yankee Fan Valhalla Easily Tames the Panthers, 61-38

A basketball game was scheduled for the afternoon of Friday, January 4, between the girls? teams of Rye Neck High and Valhalla. Instead, they held a teaching clinic. Unfortunately for the Panthers, the visitors did all the schooling.

Lesson 1: Hold onto the ball. This one?s gonna take a lot of work. Rye Neck probably turned the ball over an average of once a minute. A lot of that had to do with?

Lesson 2: Run a disciplined press. Valhalla is an unprepossessing team when you watch them warm up. They?re not even as tall as the average-sized Panthers, and they?re not particularly fast. What they are is disciplined. Their 2-3 full-court press stole the ball time after time from Rye Neck?s guards. So, the home team never managed to set up their offense. But it wasn?t just the guards who turned it over, because of? 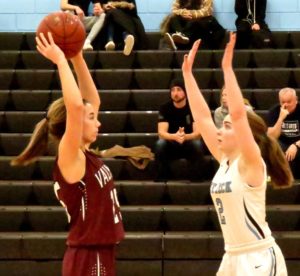 Rule 3: If you grab a rebound, hold the ball high so it?s out of reach. Rye Neck?s forwards continually grabbed a board, lowered it to their waists while looking to pass, and had it taken away.

And finally, there?s Rule 4: Get to the foul line and make your free throws. Valhalla canned 12 ?while Rye Neck managed only two out of nine. Ouch.

No wonder the locals trailed last year?s #4 playoff seeds by 30 points, 51-21, as the 4th quarter began. In fact, with the Vikings? 1,000-point scorer, Shelby Sekinski, dropping 17 in the first half, Valhalla nearly scored more points at the half (36) than Rye Neck would make all game (38). 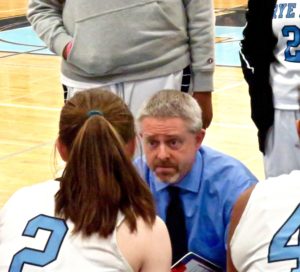 Head Coach Shawn Lincoln did what he could to stop the bleeding. He called two early timeouts to try to energize his kids.

?I challenged them to compete. I don?t know if it was the holiday break or what, but we weren?t getting back. Weren?t moving our feet.?

At least one of his players did rise to the challenge. Ninth grade power forward Carissa Pecchia scored a season-high 14 points, most of them strongly contested.

So where does Rye Neck go from here? After hosting Keio Academy this at 6 p.m., they travel to North Salem for their tournament Friday and Saturday, January 11 and 12. Where, quite possibly, they?ll display a few lessons learned.

Garnets Shine Under The Lights