Paul Varsames and his wife Monique at the groundbreaking for Locust

When Paul Varsames established his own development company in 1990, he already had a lot of notches in his construction belt. His father was a local builder who taught him the importance of being able to stand behind his work and provide quality service all the way through a project and long after it is completed.

“For my dad, it wasn’t enough to just build a nice home for a client, it was a test of character,” says Varsames.

Thirty-five years later, not only does Varsames continue to offer “white glove service”, but he is one of the largest landowners in Rye.

He was ahead of the curve when it came to the desire for downtown living — by everyone from young working couples and empty nesters — and more than a decade ago started buying up small homes from Theodore Fremd Avenue to Midland Avenue, which he rebuilt from scratch and rents.

What makes his projects run smoothly and efficiently, he says, is that he and his team, of which his wife Monique, owner of Moka Design, is a big part, it that the legwork is done up front. “We have a 150-page spec book, and everything is pre-selected before construction begins, which is beneficial to all,” notes Varsames. Having award-winning landscape architect Richard Horsman on his team ensures that properties will be graced with native plants and trees and be as beautiful outside as they are inside. 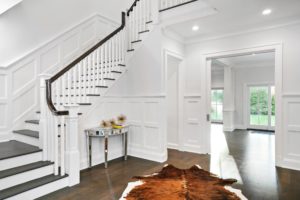 White and light-filled entry in an Island Drive home

Last year, Varsames broke ground on Locust, a luxury eight-unit condominium complex in downtown Rye. Later this year, he will begin work on contemporary duplexes up by Rye Roadhouse, at High Street and Maple Avenue, also convenient to town and train.

It wasn’t just a matter of convenience that prompted Varsames to move his office a few months ago into an old house adjacent to the Locust project. The scenic view of Blind Brook and the energy of downtown were offers he couldn’t refuse.

GREAT BONES: A House with a Rich Cinematic History

In the Driver’s Seat