Home VideosBe Glad You Are a Yankee Fan Wildcats Come from Behind to Top Canterbury, 12-10

Wildcats Come from Behind to Top Canterbury, 12-10

Wildcats Come from Behind to Top Canterbury, 12-10

What happens the year <after> an All-American graduates? The Wildcats are in the process of finding out. With Will Dodge playing at Colby College, the lacrosse team he left behind is struggling to replace his physical presence in the heart of their defense. Opposing attackers and short-stick middies aren’t being shoved aside the way they were last year; they’re getting better looks at senior goalkeeper Alex Kelly’s cage. And putting a few of their shots in.

The result? While the skill players up front are still scoring — see Ray Knopka’s four goals against Riverdale, Charlie Keating’s three versus Hackley, and Liam McLane’s two goals and six assists in the game against Long Island Lutheran—the team entered Monday’s tussle with Canterbury on a three-game losing streak. 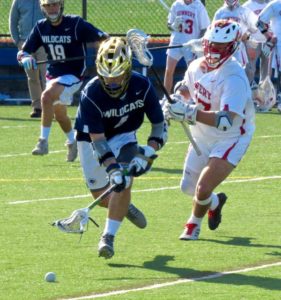 Co-captain Nishan Shehadeh is first to the loose ball.

Even the wins are nail biters. One of those was an 8-7 victory over their Long Island visitors when sophomore Keating set up junior McLane for the winner with two seconds left in the game.

Worse, when the opposition shuts off McLane and Keating, the way Gunnery did in the second half of their contest April 10, a 3-2 halftime lead becomes a 5-3 loss. “We made too many unforced errors in the second half,” Head Coach Matt Rosolen acknowledged after the game. “It was a frustrating 24 minutes.”

Would the brain trust of Rosolen, Brian O’Callaghan, and Tim Silverman be able to right the ship against Canterbury? It didn’t look that way at halftime, when the home team was down 7-5. But the Grandview boys dug down deep. With Keating scoring five goals and Konopka adding four, Rye Country Day took the lead in the fourth quarter. And they kept it thanks to goalkeeper Kelly, who had 11 saves.

Of his first-year starter in goal after the graduation of star Eddie Abrams, Coach Rosolen said, “Alex has this type of play in him, so I wasn’t surprised by it.”

The team hosts St. Luke’s post-press time, and then they go on a road trip that will take them to Kingswood-Oxford, the King School, and Fieldston. The Wildcats return to the friendly confines April 29 at 4:30 p.m. against Greens Farms.

FaceTime With the City Council