Senior shooting guard and co-captain Billy O?Meara shot his Wildcat basketball team back from oblivion (they were down 18-2 after just six minutes of play!) to defeat visiting Brunswick 72-66 Wednesday, January 9.

All told, O?Meara had 26 points on the afternoon, nailing six three-pointers?five of them after halftime?to put away the Bruins after dropping a 70-61 verdict to them at Greenwich the week before Christmas. 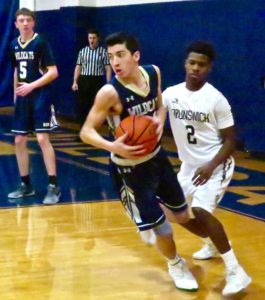 After watching his team fall way behind in the early going, first-year Head Coach Brendan Barile ordered his kids to press the Bruins all over the floor. The move woke the Wildcats from their slumbers and forced Brunswick to play run-and gun. With senior Brett Robinson and junior Shane Regan contributing five points each to the comeback, the locals closed the gap to just three at the half, 33-30. 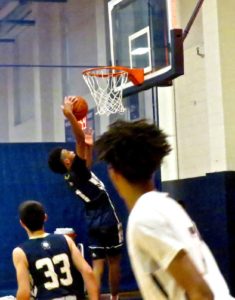 The second half saw the visitors hold onto their lead, going up 45-41with 10 minutes left in the game. But Rye Country Day was playing with real passion now, trapping ballhandlers at half court and then sinking their shots at the other end?11 of them from beyond the arc when all was said and done.

Before the season began, Coach Barile?himself a two-year varsity captain at New York?s City College?said he wanted his team to play an up-tempo game, ?with a real commitment to defense and rebounding.? He got exactly that against Brunswick.

The Wildcats sandwich a home game Tuesday against St. Luke?s around trips to the Masters School and the King School. They?re back Friday the 18th to take on Greens Farms Academy at 5:45 p.m.

The Sporting Muse: Athlete Of The Month Tyler Webb

The Final Slings and Arrows of the Campaign...