It’s an annual ritual for the Wildcats.

“And their senior captains shall lead them to the Promised Land.”

The two-time defending champs secured the silverware, but surprisingly, it wasn’t a cakewalk. After all, this was the 17-4 juggernaut that scored seven goals in a game twice this season. They scored eight goals twice, and nine goals three separate times. In other words, Head Coach Brett Farson’s guys were used to rolling over opponents.

They took the ice at Twin Rinks in Stamford 48 hours earlier for the semifinal against a St. Luke’s team they’d just beaten by 5-1 on the road in the regular-season finale. But the Lukies gave the Wildcats all they could handle before succumbing 6-5.

That set up the third meeting of the season with the Harvey School in the finals. The first contest in early December was a shootout that ended up 8-5 for Farson’s group. The rematch up in Katonah was a more tightly-played game, with the Wildcats winning 4-1.

But Harvey must have been thinking third time’s the charm as they jumped in front midway through the first period at the Grandview Avenue rink on a soft shot by James Mettler, one that somehow got past ninth-grade Wildcat goalie Ian Tumm. The youngster would more than make amends by helping his defense kill off six second-period power plays.

Meanwhile Kissell and Cohen would sandwich late scores around a second one from Harvey to make it 2-2, a score that would stay tied through the end of regulation. Coach Farson credited another ninth-grader, center Jackson Stein, with the move late in the third that split defenders and drew a penalty. 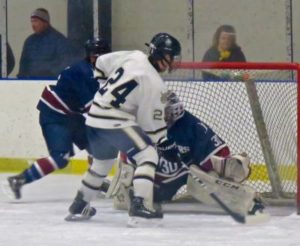 There was still a minute and a half to go on the penalty in overtime when Cohen got control of the puck in the right corner. He skated out and tried a left-handed wrister six feet out from the crease. He whiffed, but corralled the puck and shot behind the keeper for the 3-2 win and the title.

Afterwards, Coach Farson said, “Our captains Kissel and Cohen came through in the clutch and played their best hockey this postseason when it mattered the most. They are both special players, each in his own way. It was thrilling to see them finish their careers with a league title in sudden death overtime with everything on the line.”

The winning score triggered a mad dash over the boards by the entire Rye Country Day team. You’d think they would be more blasé about these titles by now.

Local Residents Come Out to Play

Playground for the Young and Studious

The Value of Good Schools

Wildcats Starting to Heat Up Behind Stefanoni

Drive with Caution in Firemen’s Circle, or Avoid...