An Art-Filled Weekend in Pittsburgh

While many seek spa retreats or resort getaways to unwind, I prefer to explore cities. When the opportunity arose to spend a weekend in Pittsburgh, where I had never been, I jumped at the chance.

Pittsburgh, I had heard, is a trendy, artsy, foodie and sports-lovers’ town that’s been on the up-and-up for a while. In 2017, the title of a New York Times feature captured the transformation: “Built on Steel, Pittsburgh now Thrives on Culture.” It so happened that “Hamilton” was having a run there in January, and Pittsburgh is home to the Andy Warhol Museum, a tribute to the artist, a city native.

Since weekends are short, we needed a tight itinerary. Thankfully, former Rye resident and UVA tennis star Emily Fraser, now a Pittsburgh realtor, outlined the must-sees and -dos for first-timers.

The first stop was the Mattress Factory, a contemporary art museum and experimental lab that takes up four buildings in the city’s North Side. Unique installations included <A Second Home>, a row house transformed into a series of mysterious and mystical rooms with unusual objects, videos, and lots of twists and turns. In another building, artist-in-resident Karina Smigla-Bobinski’s interactive <ADA> allows visitors to gently toss a large inflatable ball that makes charcoal marks on the walls, ceiling, and floors, so the work is continually changing. Indoor painted murals, 3-D installations, and a Greer Lankton exhibit were additional highlights. 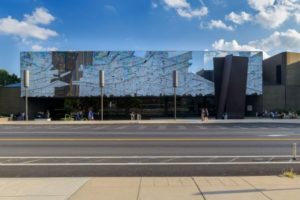 Then it was on to “The Strip”, the warehouse and old factory district and home to the relatively new Pennsylvania Market. On the first floor is The Olive Tap, which features over 50 olive oils from around the world for tastings and custom bottling.  On the second floor is the Wine Library, an event venue with a setting similar to a library, yet these bookshelves are filled with wine bottles organized by countries. Outside, a stroll through the streets took us past large specialty shops featuring Italian cheeses with giant parmesan wheels, meats, spices, and coffee with huge barrels of beans and fresh cappuccino. And Steeler fan gear seemed to be everywhere.

Pittsburgh has a vibrant restaurant scene where many award-winning chefs have made their mark. We dined at The Commoner, a trendy gastropub downstairs in the swank Hotel Monaco. With a large open kitchen and long lively sports bar, the restaurant offers exotic signature cocktails, a wide selection of beers, and an extensive wine list. A farm-to-table menu features a fresh take on traditional tavern fare and irresistible desserts.

Since we had just seen the Andy Warhol exhibit at the Whitney, we decided to forgo his museum in order to spend more time at the Carnegie Museum of Art, which houses a collection of more than 30,000 works in all genres. The most memorable areas were the Hall of Architecture with its plaster casts of noted monuments and figures and the Hall of Sculpture with its classic courtyard surrounding a contemporary sculpture of local materials. The building’s impactful 30- by 160-foot façade features the mixed media work of Ghanaian artist El Anatsui whose enormous creation, <Three Angles>, includes his signature bottle caps and printing plates sourced from a local press.

In the cultural district where we stayed, there were lots of restaurants and art galleries plus comedy and jazz venues. Getting around was easy via Uber and public bus.

Pittsburgh is only an hour flight from New York, and the airport is 25 minutes from the downtown. Since there’s way more to do, a spring visit might be in store.

Photo by Bryan Conley, courtesy of the artist and Jack Shainman Gallery

The Hall of Sculpture at the Carnegie Museum of Art

<ADA> by Karina Smigla-Bobinski, a unique installation at The Mattress Factory

Matt Holmes: Where Are They Now?

Beyond Rye: The New Berlin

Following in the Footsteps of Many Pilgrims Before...

Beyond Rye: Ecuador with the Grandchildren

Beyond Rye: Rolling with the Peruvian Punches

Beyond Rye Land of Fire & Ice

BEYOND RYE: All Aboard to Antarctica

Beyond Rye: A Walk in Paris that Inspired...