Merriam-Webster says the origin of the term ?barnburner? was ?an allusion to the story of an old Dutchman who relieved himself of rats by burning the barns?which they infested.??These days it simply means a thriller of a back-and-forth game, exactly the kind Rye won last night in the final seven seconds at Draddy Gymnasium.

Down 61-60 in a seesawing contest with the Horace Greeley Quakers, junior guard Quinn Kelly drove the lane before dishing the ball to the open man, senior Thomas Flaherty. Stationed slightly to the left of the top of the key, Flaherty nailed a nothing-but-net three-pointer to give the Garnets their final lead and the ballgame. 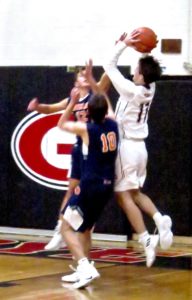 Quinn Kelly scored 18 points, all of them contested.

During pre-game warmups, the two teams looked evenly matched. Then, when the refs blew the whistle for the opening tap, all the height Rye Head Coach John Aguilar has on his squad took seats on the bench; none of his starting five tops six-foot-one. And all of them were dwarfed by Greeley?s front line of 6?4? senior Chris Melis and 6?5? freshman Nick Townsend. Sure enough, Melis would grab a bushel of rebounds and score 18 points on the evening, nearly all of them down low. Townsend added 14 on layups and tap-ins.

The story of the game, though, was three-point shooting, the only way Rye was going to hang with the Quakers. And hang they did. Kelly and senior guard Sam Poole both hit 3?s to send the locals up 15-12 after one quarter, aided by junior guard Rafael Velasquez?s buzzer beater of a lay-up.

The second period was dead even, highlighted by four more Garnet threes?two by Kelly and two by junior James Mackle. On the other end of the floor, senior Quaker guard Christophe Sauerborn was doing his own trifecta thing: he would make four in the first half and four more in the second. It seemed that, no matter what kind of defense Coach Aguilar threw at the visitors, including a variant on the old box-and-one in which everyone plays zone except for a lone Garnet tracking Melis down low, the moment Sauerborn found a little daylight he?d hit another three. The senior led all scorers with 26 on the night.

The third quarter ended with the teams tied, 44-all. And the final period seemed to stay that way. It was 47-47 with six minutes left in the game. A minute later it was 50-all. The smaller but quicker Rye players surrounded the taller visitors like a pack of hounds who?ve cornered a stag. Only the stag would be fouled and go to the line to shoot two. Had Melis done better than 4-of-11 at the charity stripe, the outcome would have gone the other way.

Greeley went up by a basket with four minutes left, but Matt Tepedino?one of a host of Dino Garr?s speedy football players who now conduct their business on the hardwood?hit a three, making him co-higher score for the Garnets with 18 points. He would also grab his fifth steal of the game down the stretch. 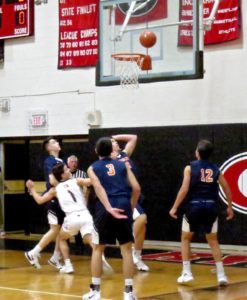 Matt Tepedino slithers through the taller Quakers for two.

It was 55-55 with three minutes to go and 58-all with 90 seconds left. Then Flaherty, holding the ball at the top of the key, saw senior guard Troy Egan beat his man on a backdoor cut. Flaherty?s perfect assist sent the Garnets up before Greeley?s Sauerborn nailed his 8th and final three of the game with 44.6 seconds left. Redwoods 61, Ordinary Trees 60. 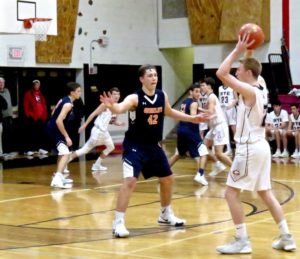 Thomas Flaherty is about to go backdoor to Troy Egan with a minute to play.

It was still that way with 10 seconds left in the game when Kelly launched another drive only to pull up and find Flaherty for the game winner. Afterwards, Coach Agular said of his hero, ?We knew Thomas could play last year, because we saw it in practice. All he needed was confidence. Now he has it.?

There were two varsity basketball games played in Rye last night. The Garnets lost the one in the paint but won the game outside the arc, stroking 13 three-balls. Just enough to take the barnburner and send the team?s record to 3-1.

Rye hosts three non-league games during the rest of December, facing Hendrick Hudson on the 18th, Spring Valley on the 21st, and Ossining at 3 p.m. after Christmas on December 28.

No Civics Class: It Must Be The Weekend

In Order to Form a More Responsive Council…

One Teardown Too Many

One Woman’s Mission to Stop Legalization of Marijuana

The African-American Cemetery, Rich in History and Heroes,...