Home Special ArticlesArchived ArticlesBeyond Rye Beyond Rye: On Safari, and in the Heart of the Maasai

Beyond Rye: On Safari, and in the Heart of the Maasai

On Safari, and in the Heart of the Maasai

After trekking with gorillas in Uganda, we headed to Tanzania on safari through the Serengeti, Ngorongoro Crater, Olduvai Gorge, and Tarangire National Park. Somehow our family had never gotten around to going on safari until now. After seeing dozens of nature specials on TV, “The Lion King” as a movie and Broadway play, and visiting Disney’s Animal Kingdom, I was convinced a real safari experience did not need to rate high on our bucket list, especially because the ‘kids’ going with us were 25 and 27.

Boy was I was wrong. I am a convert and ready to return. Nothing prepared me for the majesty of the endless plains, the spectacular scenery, the animals in their natural habitat, and the culture of the Maasai people. Ultimately, it was the stark reality that if I got out of the safari car or walked alone at night at our camp without a security guard, a predator might likely eat me. Television and movies may provide a closer view or capture moments one may not see in the wild, but nothing compares to the real thing. Being on safari in Africa is extraordinary. 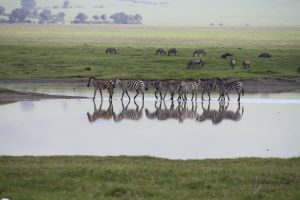 The Serengeti was filled with thousands upon thousands of zebras and wildebeests beginning their great migration into Kenya, following their centuries old patterns of searching for green grazing lands as the seasons change. It was magical, mystical, thrilling, breathtaking, and awe-inspiring. There were hundreds of elephants in matriarchal herds and several dozen giraffes gracefully eating from tall hillside trees. We saw a single majestic leopard on the lookout for prey from his tree branch and lionesses lounging in tall grasses alongside watering holes, ready to pounce. There were hippos, gazelle, and water buffalo, exotic birds, and warthogs everyone called pumbas, a nod to “The Lion King”. We even watched a lion eat an adult water buffalo (not close-up like TV, thank goodness). 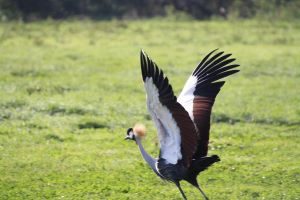 Each day dawned a new adventure, including our visit to Olduvai Gorge, where in the 1960s archaeologists Louis and Mary Leaky discovered human fossils dating back over 1.4 million years. We were taking a guided walking tour to learn the history of the Gorge and its people over the millennia. Our guide was Maasai and when not living in his village, doubled as a tour guide and security person for our safari camp in the heart of the Maasai region. 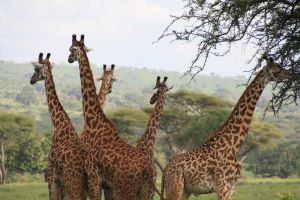 Waiting for our group to assemble, our guide asked me, “What is your family business, goats or cattle?” He said, “Mine is cattle,” explaining that he came from a village about two days walk from this site, working a few days each month with the tourists before returning to his family, village, and cattle herd.

Of all the variations on the theme of what do you do, this was a first. When the two options are goats or cattle, how does one explain banking and Wall Street? Even though we had the English language in common it dawned on me that this was going to be a cross-cultural exchange unlike any I had experienced.

I dove in. “Well, our family was in a business that helped people pay for things,” I answered, hoping this simple explanation would bridge the cultural divide. The smile on his face let me know. “Yes, I understand,” he said. He too had to pay for things. “Each year I take several of my cattle to the local school to pay for my children’s school fees.”

I was in awe. We had found common ground, but we were not living in the same world. The experience of conversing with an individual whose culture is still based on the historic occupation of nomadic goat and cattle herder, using historic traditions and techniques to gather water, firewood, tend to herds, and protect an ancient way of life was nothing short of stunning.

Once again, I was reminded that our one planet is home to populations of people and animals that live very differently.