BEYOND RYE: The Southern Cone

It is gratifying to discover that, even after a lifetime of travel, there exists a destination that we were not quite prepared for, that overwhelms with its breathtaking beauty. Such is the majesty of the glaciers and the otherworldly sculpted mountainous profiles of Patagonia.

Our recent travels actually encompassed the vast geographic area referred to as the (somewhat loosely defined) Southern Cone. Since this area incudes Buenos Aires, Santiago, and everything south to Tierra del Fuego, two weeks, by definition, is but a survey trip. However, five internal flights, and countless bus and boat rides definitely introduced us to several of the jaw-dropping essentials of Patagonia, as well as those of the major cities further north.

We began in Mendoza, the heart of the Argentinian wine country, the Malbec region to be precise. An odyssey of tastings and pairings, we sipped our way through boutique wineries, all historic, all charming. The Andes to the west are an ever-present backdrop. Mendoza itself is an attractive, park-shrouded working city.

Next was Buenos Aires, a vast world city. “The Paris of South America”, it really has every imaginable historic style of architecture, narrow crooked streets, wide Parisian-like boulevards slashing the city at oblique angles and, of course, the Evita balcony in the Presidential Palace. (Madonna was actually permitted to film on that balcony.) A futuristic, rotating footbridge, the Puente de la Mujer, by world-renowned architect Santiago Calatrava, was designed in 2001 to incorporate and enliven a previously neglected warehouse section of the waterfront. The results have proven to be an extremely successful example of urban renewal. The bridge itself is a popular selfie destination. (Dare I mention Calatrava”s Westfield World Trade Center, a soaring monumental space in search of a purpose?)

The La Boca district, on a protected outlet to the Atlantic, was the port of arrival for immigrants through history, most prominently, the vast Italian migration beginning in the mid-1850s. Its wildly colorful tenements make this area a bustling tourist hotspot. 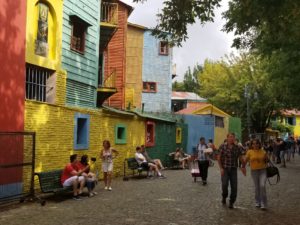 While I am not particularly a fan of the ubiquitous foodie-laden travel articles, a shout out for the much-heralded Argentinian beef is totally in order.

And this is Buenos Aires, so tango is everywhere – night clubs, street dancers, souvenir costumes, T-shirts, refrigerator magnets. And as we were tourists, we took in the requisite tango show. This mainstay ensemble, appearing in a landmark hotel, is highly professional and polished, highly entertaining. More like musical theater, the performers and musicians are exceedingly accomplished.

Our bucket list destination, Patagonia, is roughly1,300 air miles south of Buenos Aires. An entirely different wardrobe with which to confront astounding wind-chill conditions was necessary. The picturesque town of El Calafate, Argentina, is the jumping off point for boating tours, glacier-watchers, anglers, day hikers, and serious trekkers. Upsala Glacier is in the vast Los Glaciares National Park, a UNESCO World Heritage Site. Only accessible by boat along Lago Argentino, this glacier is thirty-six miles in length, receding into the mountains. You literally see but the tip of the iceberg. Its breadth is hard to imagine without having a vessel in the photo for scale. The shocking blue color is the result of the different absorption rates of the sun’s rays. 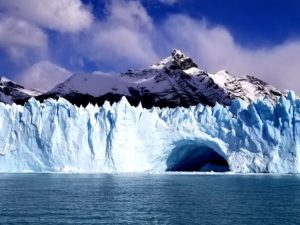 The most visited site in the Park is the Perito Merino Glacier, which can be viewed via a very accessible network of footpaths, as well as by boat circumnavigation. The universal response to first seeing this glacier is an audible gasp.

The height of the “wall” in these photos is over 220 feet, and this particular wall is two miles in length. The cavern-like void in the photo was the result of “calving”, which we were fortunate enough to witness. The sound was thunderous. We were told that this particular cavity would actually regenerate.

However, on one of our overland hikes, while standing on a tract of barren land, we were shown a series of photographs taken in each of the last five decades, illustrating how this land was once covered by a vast, continually receding glacier. The increasing acceleration of this process, per those photographs, needs no further explanation.

And no – this is not a misplaced photo of the Swiss Alps, it is Los Glaciares’ own version of the Matterhorn.

Next, a half-day bus ride westerly to the Chilean Patagonia. Torres del Paine National Park is the most visited park in the country. While much of it can only be seen over water, via a vast network of lakes, rivers, channels, and fjords, (GOOGLE Maps) there is nevertheless abundant scenery and wildlife viewing via land cruiser. Even rainbows are abundant.

Our guides told us that there are four seasons in Torres del Paine, and each occurs every day — not far from accurate. We had heard about the notorious winds from previous visitors to the region — sometimes brief, other times sustaining, sometimes with advance warning, other times not. Reliably unpredictable. One of our drives through the park was cut short when we encountered 80 m.p.h. winds that lifted marble-sized pebbles and dropped them on the windshield, all but shattering it completely. The authorities closed the park for the better part of the day. On the drive back to the lodge, the guide graciously offered to share his <mate>, and I accepted. This potent herbal brew definitely redefines the notion of acquired taste.

We encountered similar winds on a trail walk. Our guide demonstrated a crouching technique so as to increase our stability and resistance. Staying planted on terra firma can be challenging (speaking of being blown away, figuratively and literally). A real downer for us was a wind-related cancellation of an all-day boat ride through the network of waterways which would have introduced us to glacier formations that, judging from photos, rival those on the Argentinian side.

Then again, it is these very forces of nature that have shaped the region’s spectacular features, and continue to do so.

Emphatically, I don’t wish to present a case for avoiding this spectacular region, which certainly gets its fair share of tourists from around the world. Of course, the local population is totally unfazed by the weather cycles. And to be more accurate, our visit here was at the tail end of their tourist season, with autumn (their version) fast approaching. Many establishments close up for the year at the end of April. Summer, such as it is, has warmer and more predictable weather. A sound travel tip for visitors to Patagonia would be to budget a couple of extra days, factoring in some uncooperative weather, and don’t assume a clockwork itinerary. 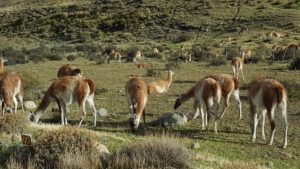 The fauna, in all its forms, is abundant. We tried to get a glimpse of not-too-rare pumas one early morning (they are nocturnal) but they weren’t cooperating. Guanacos, somewhat skittish, dot the hillsides. While birding, which we try to fold into our travels, took a back seat, roadside species included black-necked swans, Andean flamingoes, several species of caracara, a variety of teals and widgeons, and the lesser rhea, (Patagonia’s resident ratite). Also, a split-second view of an Andean condor.

Singular Patagonia, our hotel in southern Chile outside the town of Puerto Natales, has to be one of the most unique pieces of hotel architecture one is likely to encounter. Formerly a sheep meat-processing factory complex, it was repurposed, reimagined in 2011, and is a Chilean National Heritage site. Situated on the shores of the Señoret Channel, the guest rooms, with breathtaking views of  mountains and glaciers, are all former refrigeration chambers! The corridors, elevators, the funicular which connects the various buildings, all weave through the original, restored processing equipment.

Finally, a day in Santiago (back to shirtsleeves), a bustling city three times the area of Buenos Aires. The Andes Mountains, directly to the east, serve as an ever-present backdrop, as does the Chilean Coastal Range to the west. This city, like Buenos Aires, merits at least three days to even scratch the surface. The fact that we were able to have even a day here was really more a function of the gap in airline connections. Given our brief time frame, we did our own six-hour walking tour of the immediate neighborhood, the downtown, and their very impressive underground, multi-tired, skylit cultural center filled with mini-museums, shops, and dining.

Our travel agents, Craft Travel Group, with whom we are third-time clients, put together a rewarding, eye-popping, precision-packaged tour of the cone of South America, with a full appreciation of our preferences and constraints. Our countless internal connections went off without a glitch.

While certainly a far cry from “If this is Tuesday…….”, our travels are, more often than not, broad-stroked, covering the high points of a larger geographic swath.

A more focused tour of Patagonia might comprise traveling another 400 miles south, beginning at our southernmost reach, down to Tierra del Fuego. Weeks could then be spent navigating roadways and waterways, discovering different glaciers, peaks, flora and fauna along the way – (hmm?).

Perhaps our particular bucket list approach has more to do with its ever-expanding length versus the reality of time.

At The Movies: John Wick 3

Beyond Rye: Grateful for Gorillas

BEYOND RYE It’s Time for Portugal

Beyond Rye: Paris with Children

BEYOND RYE: Navigating Nantucket Off Season

BEYOND RYE: Get Thee to a Former Monastery...

BEYOND RYE: On Foot in Italy from Vineyard...

BEYOND RYE: Cultural Side of the Caribbean