The Brook looked refreshing on a warm autumn day.

Rye left the football field Saturday afternoon having won for the 18th time in the last 19 renewals of The Game, Westchester’s most storied rivalry. Years from now, though, Harrison fans will probably be calling it The Half. Because that’s exactly how long the home team made this particular one interesting.

The two squads left the field tied at halftime 13-13, with the 2019 Huskies giving the kind of effort their 1999 State Championship team and All-World running back Sammy Maldonado—returning after 20 years as honored guests—could appreciate.

First-year Harrison coach Jay Ciraco, quarterback of that title team, knew exactly what was at stake. “I’m not going to sugarcoat it. People want to see Harrison be more competitive with Rye.” And for a while, despite entering Saturdays’ tussle with more losses than wins, they were.

The Huskies yielded an early Caden Whaling plunge over the middle, capping an 85-yard drive on Rye’s first possession. (The talented sophomore would go on to rush for 142 yards and two scores on the day.) Then Harrison shocked the Garnets by coming back with two scores of their own. The second, on a reception by sophomore A.J. Troilo, son and grandson of storied Harrison coaches, nosed the home team in front 13-7 with two minutes left in the half.

As it turned out, that would be their high-water mark. Lavelle immediately found Matthew Tepedino on a second-down-and-five effort near the right sideline. The speedy receiver broke away, only to be tripped up from behind by the last defender.

No problem. On the next snap, Lavelle—Rye’s Lions Club award winner for September —brightened October for the visitors when he found Quinn Kelly downfield to his left for the TD. When Freddie Clarke’s point-after kick was barely wide to the left, the game was tied going into the locker room.

Whatever was said at the break, while the cheerleaders and the bands of both teams performed on the field, it worked for Rye Head Coach Dino Garr. He explained, “They run a triple-option offense. They want to get you isolated with their blocking, and if you don’t know your assignments, where their halfbacks are, where their quarterback is going, you’ve got problems. They run this all year, and we had just one week to prepare. So, we had to iron things out a little.”

After the ironing, the second half would run truer to form. The Garnets had the ball on their own 44 facing third down with 22 yards to go halfway into the third quarter. All Lavelle did was find Quinn Kelly for a 45-yard completion before walking it in on the next play for a 20-13 Garnet lead.

After a great open-field tackle on the Section’s leading ground gainer, junior fullback Casey Judelson, by Rye’s Lucas Perez-Segnini on 3rd and eight, the quarter would end with the visitors knocking on the door at Harrison’s two-yard-line. The first play of the final period saw Lavelle go in on a keeper. Clarke’s PAT made it 27-13.

On Harrison’s next series, Judelson took the ball on third down with four yards to go, only to be stopped cold. Ciraco’s men would pull off a fake punt, moving the ball out to their own 38, but it was all downhill from there.

A great fingertip catch on a third-down curl route by Matt Tepedino, a 59-yard jaunt by Whaling, and junior Jack O’Byrne’s 60-yard return of a fumble for the last touchdown sealed the Huskies’ fate.

Kelly had seven catches on the day for 138 yards and Tepedino added six for 74 yards. Lavelle also completed a 10-yard pass to his cousin, Brendan, a two-way starter who had missed the last three games due to a foot injury. 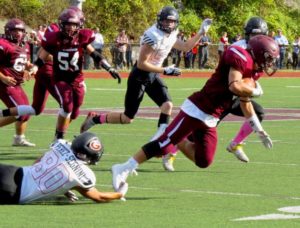 After the final whistle, the coaching staff gave Garnet senior lineman Chris Urban the game ball for replacing starting center Griffin Meyers with just 48 hours’ notice. Garr said, “Center is one of the most important positions on the field. The quarterback gets the glory, but it all starts with the center.”

Juniors Liam Lavelle and Jack Griffiths also returned from injury, and the Garnets hope star lineman Preston Greto can make it back in time for the playoffs.

Speaking of the playoffs, the powers-that-be have matched up 5-1 Rye and 2-4 Harrison once more. The third-seeded Garnets will host the rematch with the 14th-ranked Huskies in the 92nd playing of The Game this weekend at Nugent Stadium.

Let Us Work Together on a Better School...

Try to Remember the Kind of December…

Drive with Caution in Firemen’s Circle, or Avoid...

Panthers Advance In Class B Tournament