Landmark Library Aging with Grace and About to Enter Modernity

It is a truth universally acknowledged that an old and treasured small-town library, replete with charm and good character, must occasionally be in need of restoration, and that that undertaking may prompt remonstration among the citizenry.

In the case of the Rye Free Reading Room, before the citizenry hold vigils on the Village Green, they should stop by the Georgian brick edifice that opened in 1913 and ask Director Chris Shoemaker for a tour of the newly imagined spaces.

Don?t be heartsick if the first thing you notice is that the old, curved Circulation Desk has been replaced by a card table. It?s temporary, and it turns out that the old desk was actually just artfully-stained pressed wood.

?Don?t worry,? Shoemaker assures concerned visitors, ?we?re having a handsome circulation desk built and this one will be movable for those occasions when the library needs the space for special events.?

It will be in perfect keeping with the newly restored and rebuilt main staircase and the refinished built-in bookshelves. We notice something else about the first floor ? it?s filled with light. Part of the first phase of the construction plan, that was announced back in 2013 as part of the capital campaign, is to dismantle the mezzanine and let light pour from the original high windows, also being restored, which overlook Blind Brook.

?One of our goals,? notes Shoemaker, who is entering his sixth year at the helm, was to change the environment, to make the library more welcoming as well as more efficient.?

Residents who have long lingered in the fiction stacks behind the Circulation Desk will still find plenty of adventures in literature.

When the transformation of the former Technology Center into the Teen Center is complete, the library will have ?stadium seating? for about 50, an intimate spot from which all ages can enjoy performances and movies.

Upstairs, the ?Information Commons? on the north end holds the general non-fiction, health and wellness, arts & literary criticism, and philosophy collections. Large work tables and comfortable reading chairs are in regular use. On the opposite end, is the Business Center, where: high-school students find quiet corners to study or bone up on which colleges are likely to be the best matches for their interests and passions; young entrepreneurs map out business plans; and those out of the work force figure out the best strategies for re-entry.

The four glassed conference rooms are in regular use by a small group of students working on projects, students and tutors, college recruiters conducting interviews with applicants, and businesspeople putting the finishing touches on reports. 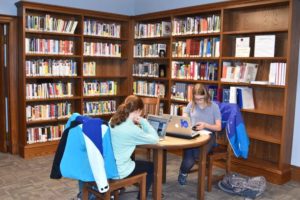 ?What we see in libraries is dedication to being a third place ? not home or school ? and one you?re comfortable in,? explained Shoemaker.

?A modern library is a programming and community hub. It?s no longer a quiet repository, but a place where people want to come, catch up and learn.?

While embracing technology ? Rye residents today have access to over one million items ? has the library, in recent months, disposed of too many books in its collection? we asked in response to community concerns. 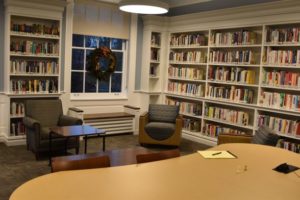 Shoemaker said he and staff devoted many hours to get a better hold on what books were flying off the shelves and which ones were collecting dust. ?We discovered a number of things, including the fact that we had more shelves than we needed, home repair and coffee table art books weren?t being checked out because readers preferred interactive media when they wanted to learn about those subjects.?

And because a book is not on a shelf doesn?t mean the Rye library can?t get it generally within 72 hours if it?s in the Westchester Library System.

?We buy about 10,000 items a year, the majority of them books,? noted Shoemaker.

When residents walk into the Rye Free Reading Room in the new year, they?re likely to feel encouraged by the respectful restoration of a classic institution. And they?ll be excited to learn that laptops will be circulated, a new Teen Advisory Council has been formed, a second annual Spelling Bee is on the calendar, and Mike Norris will be giving more Armchair Art tours.

Readers comfortably situated near one of the first-floor fireplaces.

First It?s Barbie, Next it Will Be Bobby Socks ? and BOYS!

Livin: It Must Be The Weekend

Now I Lay Them Down to Sleep

Back to the Beach

Zing Went the Strings of Our Hearts